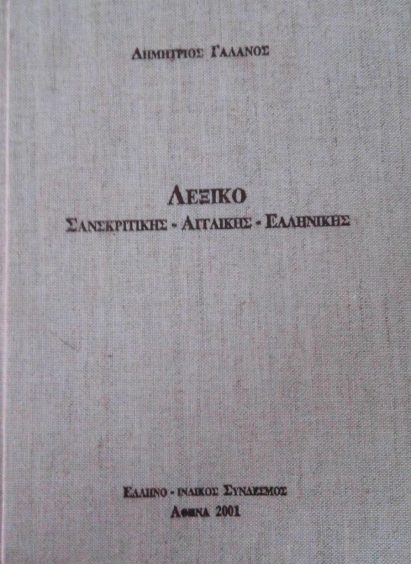 The Greek-Indian Association in Athens has published an almost forgotten manuscript, containing more than 9.000 words in Sanskrit, English and Greek, which was lying in the National Library of Greece for almost 170 years. The Dictionary was composed by the renowned Greek Indologist, Demetrios Galanos who lived in Varanasi for 40 years in the beginning of the 19th century and made a significant contribution to the advancement of Indian studies in Greece.

The presentation of the Sanskrit-English-Greek Dictionary took place on the 23rd May 2001, in the ceremonial hall of the University of Athens and was attended by a large number of people, including the Indian Ambassador to Greece, former Greek Ambassadors to India, university professors, members of the Academy, members of the Greek-Indian Society, and others.

Prof. George D. Babiniotis, Chancellor of the University, addressed the meeting and made references to Galanos as benefactor of the University and Sanskrit scholar, and to the close similarities of Sanskrit to the European languages. He also announced the intention of his University to introduce a Section of Asiatic Studies which will include the teaching of the languages and the cultures of India, China and Japan.

Sri Gurdip Singh Bedi, Ambassador of India (at the time), welcomed the Dictionary as a significant event for the further advancement of the Indo-Greek cultural relations and also mentioned the Galanos chair for Greek Studies that has started to function at the Jawaharlal Nehru University after the state visit of H.E. the President of the Hellenic Republic, Mr. Constantinos Stefanopoulos in 1998.

Dr. Vassilis Vitsaxis, former Ambassador to India and President of the Greek-Indian Society, who was the main source of inspiration for the facsimile publication of Galanos’ handwritten dictionary, added that the Vedantic scholar Yiannis Manettas has undertaken the preparation of the typographic version and its publication would follow soon. Karolos Mitsakis, Professor of Philology at Athens University and Tzannis Tzannetakis, former Prime Minister and author of two books on India, who described the literary, emotional and historical significance of the published work, gave further talks. Prof. S.A. Schulz of the Catholic University of America, who made a pioneering research in the life and work of Demetrios Galanos, has contributed a scholarly introduction.

A few years later, in 2010, Galanos’ Sanskrit-English-Greek Dictionary was edited in printed form by Giannis Manettas and published by Konidari Publications in Athens.