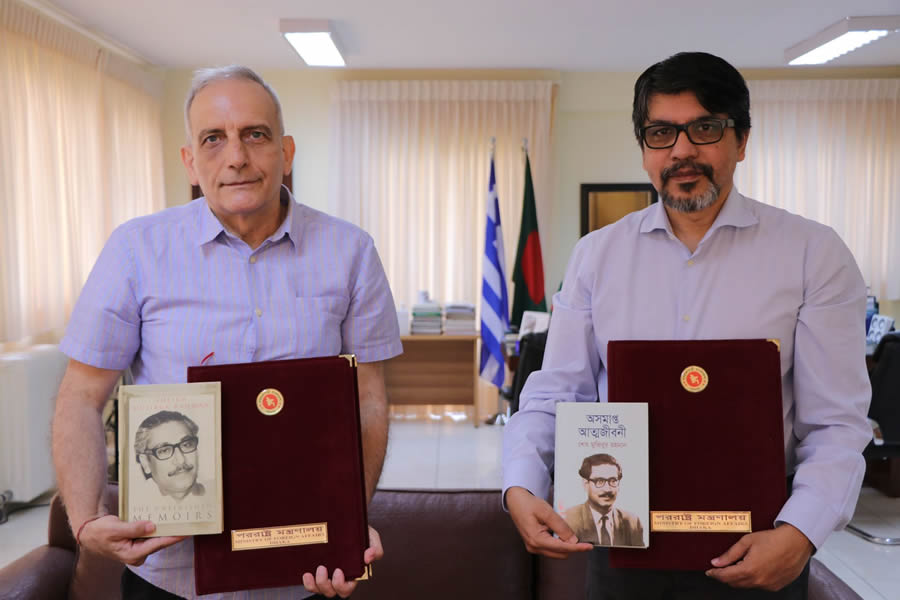 The book will be translated and edited by Dr. Dimitrios Vassiliadis and published within this year by the Father of the Nation Bangabandhu Sheikh Mujibur Rahman Memorial Trust, Dhaka. The Greek edition of the “Unfinished Memoirs” will be distributed by the Embassy of Bangladesh in Greece and is expected to help the Greek scholars and readers to get a better understanding of the history of Bangladesh and its establishment as an independent, secular and democratic state, as well as to further strengthen the Greek-Bangladeshi friendly and cultural relations.

ABOUT THE BOOK
When Sheikh Mujibur Rahman’s diaries came to light in 2004, it was an indisputably historic event. His daughter, Bangladesh Prime Minister Sheikh Hasina, had the notebooks—their pages by then brittle and discoloured—carefully transcribed and later translated from Bengali into English.

Written during Sheikh Mujibur Rahman’s sojourns in jail as a state prisoner between 1967 and 1969, they begin with his recollections of his days as a student activist in the run-up to the movement for Pakistan in the early 1940s. They cover the Bengali language movement, the first stirrings of the movement for Bangladesh independence and self-rule, and powerfully convey the great uncertainties as well as the great hopes that dominated the time. The last notebook ends with the events accompanying the struggle for democratic rights in 1955.

These are Sheikh Mujib’s own words—the language has only been changed for absolute clarity when required. What the narrative brings out with immediacy and passion is his intellectual and political journey from a youthful activist to the leader of a struggle for national liberation. Sheikh Mujib describes vividly how—despite being in prison—he was in the forefront of organizing the protests that followed the declaration of Urdu as the state language of Pakistan. On 21 February 1952 the police opened fire on a peaceful student procession, killing many. That brutal action unleashed the powerful movement that culminated in the birth of the new nation of Bangladesh in 1971.

This extraordinary document is not only a portrait of a nation in the making; it is written by the man who changed the course of history and led his people to freedom.

Sheikh Mujibur Rahman was born in 1920 and studied for a Bachelor of Arts degree at Calcutta University and a law degree at Dhaka University. One of the founders of the Awami League in 1949, he led his party to a dramatic victory in the election of 1970, a key event in the emergence of Bangladesh. He became the new nation’s prime minister in 1972 and held the position of the President of Bangladesh from January 1975. He was assassinated in Dhaka in August 1975 during a military coup d’état.