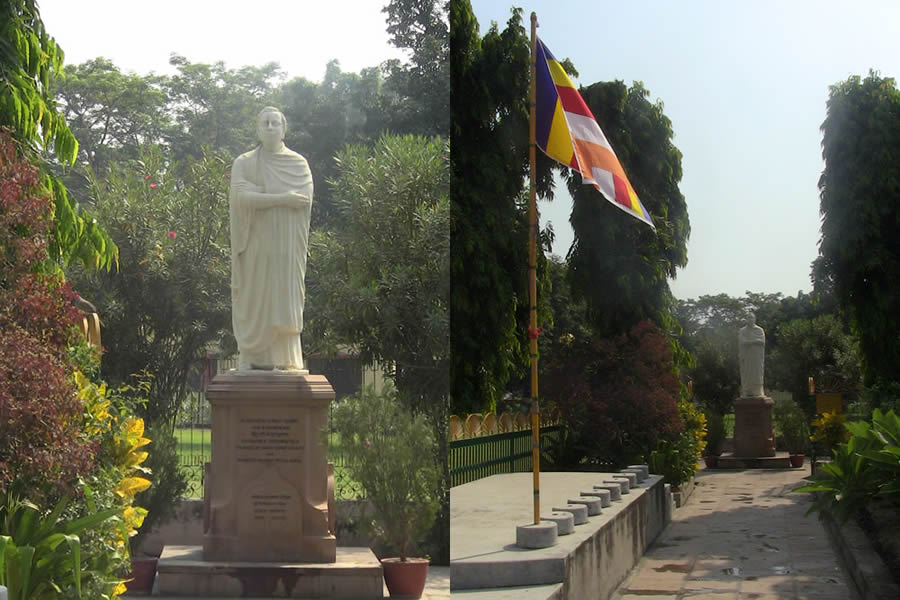 Anagārika Dharmapāla (17 September 1864 – 29 April 1933) is best known as a major  reformer and revivalist of Sinhala Buddhism and a leading figure in the Sri Lankan independence movement against British rule.

He founded the Maha Bodhi Society in Ceylon (Sri Lanka) and raised funds for the restoration of the most important Buddhist sites in Bond-Gaya and Sarnath, which had badly deteriorated after centuries of neglect. He was the editor of the Society’s journal and became world famous as a Buddhist missionary who worked for the spread of the Buddhist dharma in India, Europe and America. He represented the Buddhists of South Asia at the 1893 World’s Parliament of Religions in Chicago and conducted the first Three Refuges ceremony and the first Vesak celebration in the USA.

Dharmapala was a pioneer in the revival of Buddhism in India and inspired a mass movement of South Indian outcastes (dalits) to embrace Buddhism, half a century before Dr. Babasaheb Bimrao Ambedkar’s Neo-Buddhist movement. In the later part of his life, he became a Buddhist monk with the name of Venerable Sri Devamitta Dhamapala.

His birthday anniversary is celebrated every year with lectures and cultural programs in many Buddhist and Pali educational institutions in Sri Lanka and India.

Great Sayings of Anagarika Dharmapala:
“Let me be reborn. I would like to be born again twenty-five times to spread Lord Buddha’s Dhamma.”

“Exert yourself to realise the unconditioned, infinite, eternal happiness of Nirvana, in full consciousness in this life, on this earth.”

“Buddhism is a kind of spiritual athleticism. It teaches you the way to develop your spiritual muscles and to strengthen your spiritual tendons. If another does your work where is the glory of your effort?”

Cover photo: The statue of Anagarika Dharmapala in front of the Ceylan Budhhist temple (Mulagandha Kuty Vihara) in Sarnath.