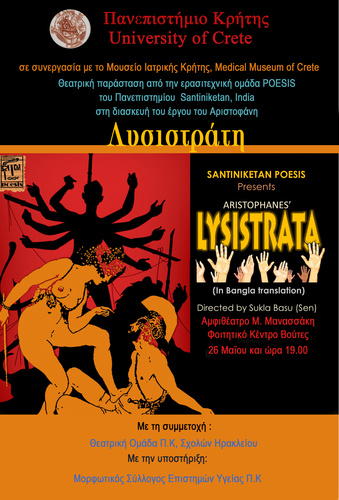 The students’ theatrical team “Santiniketan Poesis” will present an adaptation of the comedy “Lysistrata” by Aristophanes on Saturday, May 26 at 7 pm. in the M. Manassakis Amphitheater of the Students’ Center of Vouton, University of Crete.

The theatrical performance will be in the Bengali (Bangla) language and there will be simultaneous translation into Greek with surtitles.

The hospitality of the Indian students and the theatrical performance take place in the framework of the networking events starting with the International Museum Day in cooperation with the Medical Museum of Crete.