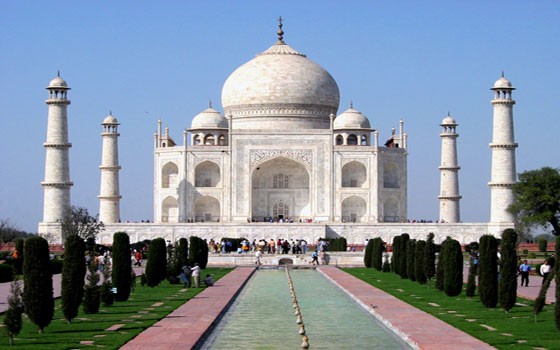 I feel so plundered you said, my eyes it’s as if

suddenly they don’t belong to me; I feel like an

miracle. l, inadvertently said: it was the emperor

Jahan who commissioned it, stricken with grief at

the death of his wife Mahal, he gathered the finest of

artisans and craftsmen, architects and designers, to

capture the essence of her beauty, this sigh of love.

In rememberence to his deceased queen. What

grows from the heart knows no words.

As Dawn was breaking over Agra. And you were in

a highly abstract mood, struggling to take hold of

your feelings, to compress them into the faintest of

sighs, your eyes were  one overflowing glow of

well-being, you were out there, receiving God’s

blessing underneath a sky of fast-fading stars.

The Taj Mahal had stopped you in your tracks,  and

you searched for words to describe it, but they were

miles away, they were on the other side of the moon,

strewn  all over the place on the dark side of mars;

they were  shut tight in your very own dictionary

between  hard covers, and so you stood wordless,

your eyes like two falling stars, as I stood beside you

waiting for you to recover, for we were only at the

outskirts of it, by the front entrance  so to speak.

Well-kept gardens separated us from it. People

began to file passed us speaking in hushed tones,

already the photographers had taken up their

position and were offering their services, one

approached us, testing his flashlight; he was the

and jet black hair,   proud of his Russian ZENIT

TTL camera, offering to take our picture, but you

refused, you were adamant, your were suddenly

charged and uncompromising, no  you insisted, you

wanted this moment stored only in memory, and in

your heart, you said, if hearts can store pictures, and

so you wrapped you arms around mine and pulled

me away in the direction of the Taj, as the sun began

to flex its muscles over the city of Agra.