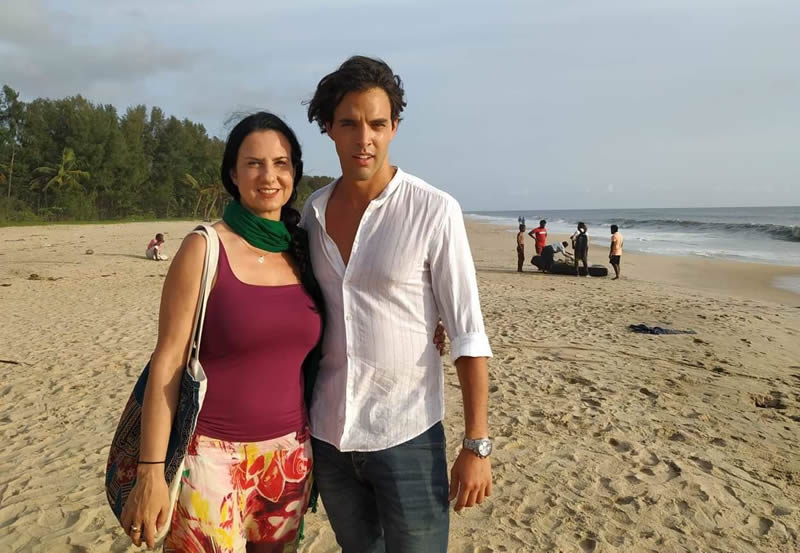 The production of the new daily series ‘Stars on the Sand’ broadcasted by Alpha TV Greece and Cyprus went all the way to Kerala in India to carry out part of its shootings. This is a G&N Make It Productions by Andreas Georgiou and Koullis Nikolaou.

Veronica Iliopoulou, one of the starring actors of the series, spoke to INDIΚA about her role in the television series and her long experience in the Bollywood world and said the following:

“I impersonate Sassa, a Greek woman who, for many years, has lived in India and is very much into yoga and meditation. This role is very close to my heart, as there are lots of elements that my personality and that of the heroine I incarnate have in common. I, myself, lived in India for many years, I have been into yoga and meditation since a young age and I speak Hindi. My teacher was professor Dimitrios Vassiliadis at the Language Teaching Centre of the National and Kapodistrian University of Athens. During my time in India and my stay in Bombay, I took part in Bollywood Productions as well as in concerts by the famous bhajans and ghazals singer Anup Jalota. My trip to Cochin in Kerala, for the shooting of India based scenes, was another fortunate opportunity for me to visit again ‘my second homeland’.

I would like to thank the exceptional production company for their care during the shootings, the Producer Koullis Nikolaou, who saw Sassa in me and chose me to incarnate her, the Director Theodoros Nikolaidis, all my collaborators and the Scriptwriter Rena Ringa, who gave me the opportunity to serve the character that she created. And of course, the Writer Rena Rossi-Zairi, who is the primary source of the part in India, as the scenario is based on her best seller book ‘Stars on the Sand’ that takes place in India.”