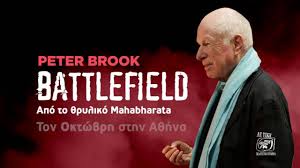 “A word does not start as a word – it is an end product which begins as an impulse, stimulated by attitude and behaviour which dictates the need for expression”

Thirty years after the legendary production of “Mahabharata,” the 90-year-old British director” was inspired once again by the ancient Indian epic and  created his latest theatrical play “Battlefield”.

The work conveys the timeless message of the Mahabharata which focuses on the way in which the man will be able to find the inner peace in a world torn by suffering, death and destruction.

The Battlefield will be performed at the “Theatron” of the Center of Culture “Greek World” from 17 to 20 October, 2016.

The performance is presented by the theatrical group of Peter Brook and Marie-Hélène Estienne in English with Greek subtitles and live music.