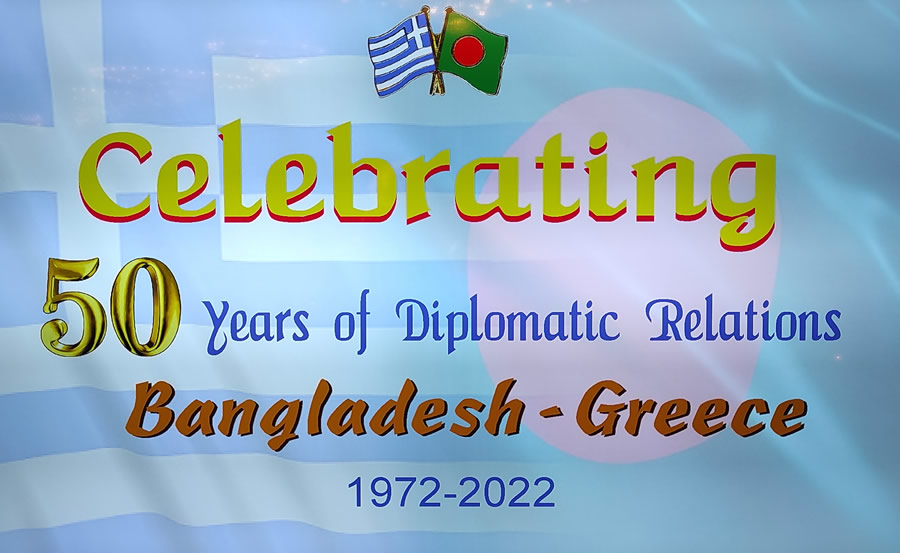 The Hellenic Republic was one of the first countries to recognize the independence of the People’s Republic of Bangladesh immediately after the victory of the Allied Powers in the Bangladesh Liberation War and the forced capitulation of the Pakistani Occupation Forces on 16 December 1971.

The completion of 50 years of Greek-Bangladeshi diplomatic relations was celebrated with great brilliance in two special events organized by the Embassy of Bangladesh on 15 and 16 March 2022 in Athens in the presence of the Minister of Culture of Bangladesh Mr. M.K. Khalid, who paid an official visit to Greece for this purpose.

On this occasion, Mr. M.K. Khalid met with his Greek counterpart Mrs. Lina Mendoni and signed a bilateral cultural exchange agreement. He also discussed with her issues related to the development of archeological excavations in Bangladesh as well as the joint claim for the return of stolen antiquities.

The Minister of Culture of Bangladesh was accompanied in Greece by the multi-member dance group from the Shilpakala Academy in Dhaka, as well as the famous singer Dinat Jahan Munni with her group.

The artists presented a rich musical program at the Trianon Cinema at an event for members of the large Bangladeshi community living and working in Greece. The event was also attended by the Minister of Culture Mrs. Lina Mendoni.

The official reception took place at the Divani Caravel Hotel and was attended by many diplomats, senior officials, Greek businessmen operating in Bangladesh, representatives of Greek-Bangladeshi associations, and prominent members of the Bangladeshi community.

Speeches were given by the Ambassador of Bangladesh in Athens Mr. Ashud Ahmed, the Minister of Culture Mr. M.K. Khalid, and the General Secretary of Contemporary Culture Mrs. Eleni Dundoulaki. As part of the program, the Greek translation of the Incomplete Memoirs of Sheikh Mujibur Rahman was presented by Prof. Dimitrios Vassiliadis, who edited the translation.

In the music program that followed, Bangladeshi artists and dance groups from the Lyceum club of Greek Women danced traditional dances from Bangladesh and Greece. The program closed with a rich dinner in which guests had the opportunity to taste delicious flavors of Bangladeshi cuisine.