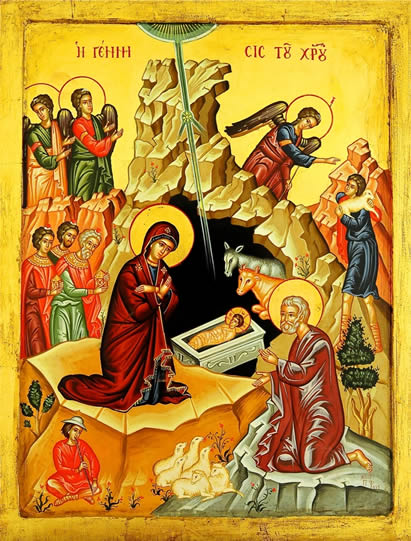 There are about 30 million Christians in India (about 2.3 % of the total population), who celebrate annually Jesus Christ’s birth on December 25. The celebrations are most noticeable in states where there are many Christians. The largest Indian Christian communities live in the state of Goa on the west coast (26%), in the states of Kerala and Tamil Nadu in the south, in the North-Eastern states of Manipur, Meghalaya, Nagaland, Mizoram, Arunachal Pradesh, and Assam. They mostly belong to the Roman Catholic Church while a significant number of St. Thomas Christians (Syrian Orthodox Church) live in the South. A small number of Greek Orthodox Christians live in Kolkata and in the broader area of West Bengal.

Christian houses and Churches in India are decorated with flowers and banana or mango leaves. They also display small electric lamps or small clay oil-burning lamps and hang out giant paper lanterns, in the shape of stars. Some also put up a nativity scene with clay figures in it or a Christmas tree. Christmas trees in India are usually artificial pine trees or native trees or bushes. Some stores, malls, and hotels in tourist areas may put up Christmas decorations and have statues of or actors playing Santa Claus.

Christmas Day is a gazetted holiday in India. It is a day off for the general population, and schools, government offices, post offices, and banks are closed.