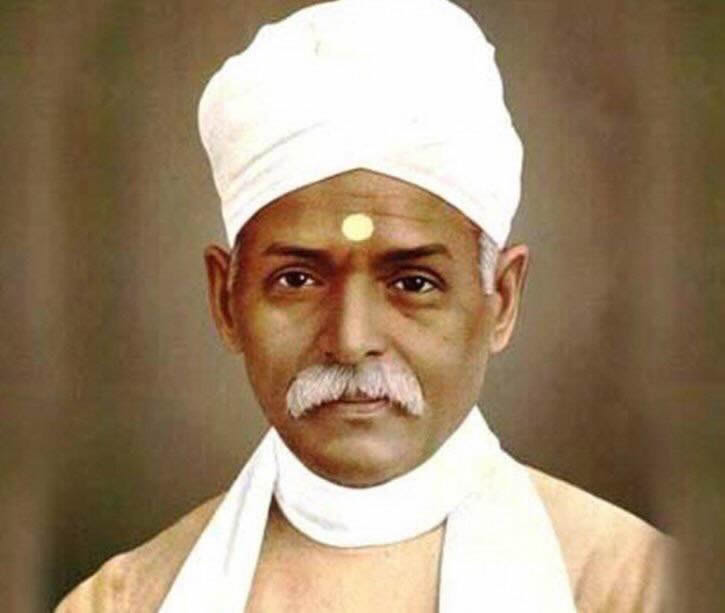 This paper presents the thoughts of Mahamana Pt. Madan Mohan Malaviya whose contributions to Indian religion and society are notable and remarkable. He felt that the future greatness of India could be built only on the foundations of its past greatness. He regarded that a certain type of life is imperative for the spiritual equality and moral freedom.

Mahamana Malaviya was a devout Sanātanī. The literal meaning of Sanātana is “Sadā nūtana”, ever new. Yūsk defines ” Sanātano iva nitya nūtanāh.” To Malaviyaji Sanātana Dharma is the base of all happiness and wealth and of all greatness and goodness.[1] According to him “the dearest thing on the earth was religion and that religion was the Sanātana Dharma.”[2] Hence Malaviyaji believed in the superiority of Sanātana Dharma. Mahatma Gandhi Says, “Malaviyaji’s, knowledge of religious scriptures was very great. He was by heredity a great religious preacher.”[3] For Malaviyaji, religion is an essential factor in an individual’s life. Religion means love and service, tolerance and mutual regard. He was convinced that the true religion will contribute in rich measures to promote harmony and happiness among all mankind. Selfless service is an important element of true religion. Hence, the service of the motherland is also the essence of religion.[4] He asserts that there can be no greater Dharma (religion) than the service of all living beings.[5]

Malaviyaji had firm faith in almighty God and realized its importance in human life. It is one God who dwells in all living organisms, though we may call Him by different names.[6] Brahmā, Vishnu and Mahesha are not three different deities but three different names of one God who is distinguished according to His different functions.[7] “One should always remember the all-pervading omniscient and omnipotent God with gratitude. The followers of Sanātan Dharma, Arya Samaja, Brahma Samaja, Sikhism, Jainism and Buddhism should show proper and respectful regard for other religions while following their own faiths. One should be resolute in one’s beliefs and should never resort to speaking ill of others, be tolerant to one’s antagonists (whether in matters of religion or social relations) and bear love towards all the creatures of the world”[8] Malaviyaji did not aspire for himself even liberation but always thought of other’s welfare. His creed was:

(which in translation reads:)

“Indeed, I do not for a royal realm aspire, for release or for paradise.
I aspire for the complete removal of the pain of the suffering living beings.”

For Malaviyaji, Hindu Dharma was quite capable to enunciate all the principles which influenced and shaped his life. He realised no need for getting guidance from other Dharmas. This does not mean any disrespect to other Dharmas. He simply showed his committed faith in Hindu Dharma. Prof. S.K. Maitra says, “In fact, Dharma and Hindu Dharma were identical for him, and if the concept of Dharma was that of something universal that of Hindu Dharma must necessarily be so. His conception of the universal was that of universal love.[9] “He had absorbed in himself the precepts of universality and the Brotherhood of man. He had respect for all religions. His faith all along was ‘live and let live’[10]

Malaviyaji was an orthodox Sanātanist, but he was never sectarian or fundamentalist. According to him,” India is not a country of the Hindus only. It is a country of the Muslims, Christians and the Parsees too. The country can gain strength and develop itself only when the people of different communities of India live in mutual goodwill and harmony. Those who disrupt this unity are enemies of their country and their community alike.” He believed that “the days of Hindu or Muslim state had long passed”[11] and the aim should be of a united Indian state. According to Malaviyaji there cannot be contradiction between truly religious men belonging to different faiths and communities. Because all living beings are the creation of the omnipotent God and the ‘ray divine shines equally in every man”.

No doubt, Malaviyaji was an orthodox Hindu. Mistakenly some of the Muslim leaders blamed him for being anti-Muslim. This accusation is misleading. Prominent leader J.B. Kripalani says: “I know that he (Malaviyaji) was a passionate advocate of Hindu- Muslim unity.”[12] His dream of future India was not of a Hindu India but of a strong secular India.

Pt. Madan Mohan Malaviya like Dayananda Saraswati was a great Hindu social reformer. According to Dr. Bhagavan Das, ” Next after Swami Dayananda Saraswati and the Arya Samaja, the creation of what may be called a common Hindu sentiment is due to him (Malaviyaji)”[13] Malaviyaji’s views about social relations are based on Varna system. He accepted fourfold Hindu classification of society but he tried to reform the later conception of castes which he regarded as an undesirable distortion of the original ideals.

In Gītā it is described that the four Varnas are created by God on the basis of Guna and Karma.[14] Malaviyaji incorporates Guna to birth also. “In support of this he quoted a Shloka which said that a full fledged Brāhmin is one who possessed of vidyā (learning) and Tapa (penance) and born Brāhmin. Every Varna normally had its appointed function in general, though there were exceptions to this code in special circumstances.”[15] Varna in its real meaning, Malaviyaji thinks, does not exist today. In its ideal sense, by performing good deeds Shudra also becomes a Brāhmin and by bad deeds a Brāhmin falls below the Shudra. He strongly advocated that a man born in a lower caste can achieve Dwijattva by virtue of his character.[16] According to Malaviyaji, such references are available in the Shāstras also. For Malaviyaji, sweeper is superior than the Brāhmana because the former cleanses while the latter generates foul matter.[17] In its real sense Varna Dharma is equally valuable for society. No caste should consider itself higher, and look down upon any other caste.

According to Malaviyaji, Shudras were entitled to study all the Shāstras including Mahābhārata, Gītā and the Purānas.[19] He asserted “if you admit internal purity of human soul, you or your religion can never get impure or defiled in any way by touch or association with any man.[20] For solution of the problem of untouchability Malaviyaji adopted the religious method. He gave Mantradīkshā to untouchables in Calcutta, Banaras and Nasika. He said that “Mantras would be a certain means of their upliftment socially, politically and spiritually.”[21]

Swadeshi was an important means and a dynamic concept in Malaviyaji’s philosophy. According to him, Swadeshi was the greatest Dharma. To Gandhiji also it was a religious discipline.[22] Malaviyaji.supported the Swadeshi movement. He explains:

“I took upon it as a part of a religious duty which we owe to our fellowmen. I consider it the Religion of Humanity and our own particular religion; the religion of Humanity demands that you should promote the Swadeshi movement to the utmost extent of your power. In purchasing a piece of cloth, manufactured by a countryman of mine, I have often felt and am feeling now, that I am helping him to obtain at least a morsel of food to enable him to live. The yarn may have come from a foreign country, but the labour he had bestowed upon it, will surely enable him to get a portion, half the price or one third or some portion of the gain in order to feed himself and those that depend upon him. When you find such terrible suffering around you, when you find the drain so great and the income of the people so small, their resources so poor, I say, it is a religious duty cast upon every man of healthy feeling to promote to the utmost extent, the production of Indian manufactures by giving them preference, wherever he can find them, over foreign commodities) even at some sacrifice”[23]

Swadeshi was the only panacea for diminishing the poverty of the country and for finding bread and employment for the inhabitants. Like Gandhiji, Malaviyaji also believed that there was no political intention behind Swadeshi. To Malaviyaji, Swadeshi would confirm Indian’s love for India or indigenous things. He appealed to his compatriots to take the vow of Swadeshi and to use Indian made commodities even though they were shaggy and to some extent uneconomical.[24]

Malaviyaji was a great educationist. Education, to him, is an essential function of the cosmic order. According to him “there was no subject of greater importance for the welfare of the people than education.” Education would solve the problems of untouchability, communal bitterness, ignorance (avidyā), etc. It would help in raising the social status of Harijans and women.[25] To him, education had no meaning if it would not succeed to produce a good man.

Malaviyaji had a comprehensive scheme of education. He correlated education not only with the culture and traditions of the country but also with patriotism, spirit of social service and loyalty to the motherland.[26] Banaras Hindu University is a glorious epitome of Malaviyaji’s idealism and realism. It was not just an imitation of other universities. “Malaviyaji, rather, had certain distinct motives and fundamental ideals in his mind while establishing this institution. The burning desire to restore India to its past glory, the urge to combine religion with education for the purpose of developing the ‘national spirit’ which was the foremost and the pressing need of the time) the necessity of reorganising the utterly disintegrated Hindu Society.”[27] All these stirred innermost of Malaviyaji. Malaviyaji wished the university education to stand on the solid basis of primary and secondary education. He wanted that the courses should be made more practical. A university should be composed of practical faculties as those of applied sciences, technology, agriculture and commerce. Malaviyaji wanted to prepare the way for a rich economic advancement through which the country could be able to face the international industrial competition. Here it is notable that in his industrial approach, Malaviyaji was more ahead than Gandhiji. Resultantly for the first time in India, a technological Institute came into existence in Banaras Hindu University in 1918.[28] Malaviyaji’s philosophy of education surpasses the boundaries of geographical limitation and integrates the other philosophies. Therefore he believed in the philosophy of “vashudhaiva kutumbakam”.

In Conclusion, it can be said that Malaviyaji was a great religious and social thinker of India like Swami Vivekananda. He was a great educationalist also. According to C. Y. Chintamani “Pandit Madan Mohan Malaviya is a model of a Hindu.[29] Sitaram Chaturvedi depicts his greatness in the following words:

“He was neither a theorist nor a propagandist but was a practical philosopher who put all his thoughts to action. Whatever he believed, he sincerely followed it and what he did not believe, he never did it whatever the pressure of public opinion might be. In this respect, he was really a benevolent and a true Hindu who understood the tides of time and lead the nation and Hindu society from good to better and better to best.”[30]

[11] Aaj, Oct. 10, 1941, Malaviya’s speech before the formation of the Allahabad University Students’ Union.

Dr. Deo Brat Chaube is a Professsor in the Department of Philosophy and Religion at the Banaras Hindu University, Varanasi. He is teaching for 23 years. His field of specialization is yoga, Vallabha and Swami Vivekānanda Philosophy. He has published many articles in Indian and international journals.