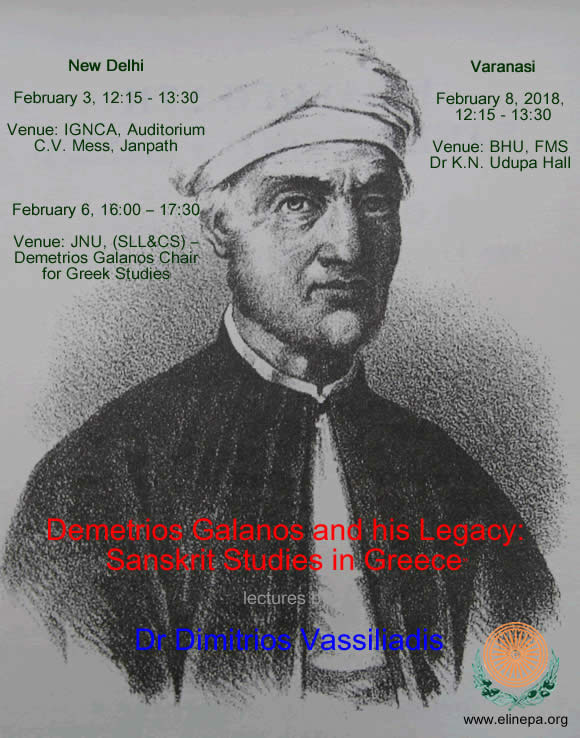 President of the Hellenic-Indian Society for Culture & Development (ELINEPA) and Professor of Indian Languages at the University of Athens, Dr Dimitrios Vassiliadis delivered a series of lectures on the theme “Sanskrit Studies in Greece” during the International Conference “Demetrios Galanos and his Legacy: Indo-Greek Scholarship 1760-2018” that was organized by the Bharat Vidya Prayojana, a long term academic program of the Indira Gandhi National Center for the Arts (IGNCA), and took place in two phases, one – in New Delhi and the other – in Varanasi, in February, 2018.

In his speech Dimitriοs Vassiliadis referred indetail to the work of Demetrios Galanos, as well as to the work of the laterSanskritologists in Greece, such as Giorgos Tserepis, Jordan Karolidis,Loretzos Mavilis, Konstantinos Theotokis and Andreas Kefallinos. He alsopresented the work of modern linguists, sanskritologists and the efforts madefor the development of Sanskrit and Indian studies at the Aristotle Universityof Thessaloniki, the Ionian University and the National and KapodistrianUniversity of Athens, as well as the work done at the  Athens Center forIndian and Indo-Hellenic Studies.

The Embassy of Greece in New Delhi, the India International Centre, the Bharat Adhyayan Kendra of Banaras Hindu University, Varanasi, and the Hellenic-Indian Friendship League, are active collaborators in this endeavour.

Dimitrios Vassiliadis, in addition to his scheduled lectures in New Delhi (Feb. 3: IGNCA, Auditorium CV Mess, Janpath) and Varanasi (February 8, 2018: Banaras Hindu University, FMS, Dr KN Udupa Hall), gave one more lecture at the School of Sanskrit and Indic Studies of Jawaharlal Nehru University in New Delhi. Also on February 10, he made a short presentation of the documentary “The Foreigner to the Foreigner: Dimitrios Galanos – Benares” by Yannis Tritsibidas at Banaras Hindu University and talked about ELINEPA’s effort to promote the cultural links of the two countries through the cinema and other visual arts.

The historic conference on Dimitrios Galanos and his Legacy was organized byIndia’s leading cultural institute IGNCA at the initiative of philhelleneprofessor Bharat Gupta. Besides Dimitrios Vassiliadis, participants from Greecewere the writer Denis Dilopoulos, Professor of Anthropology at the Universityof Athens Pavlos Kavouras, and teacher of Bharat Natyam and founder of theSantom cultural center Leda Santala, as well as four young and talentedmusicians, Avgerini Gatsi (accordion, singing), Nikos Paroulakis (ney), JamesWylie (politici lyra and saxophone) and Thymios Agazakas (uti). The conferencewas attended by many professors from India who contributed to the development ofGreek-Indian studies, such as Bharat Gupt, U.P. Arora, Vagish Shastri and K.D.Tripathi, as well as distinguished artists such as theater director RaviSharma, musician Dr Kumud Diwan and others.