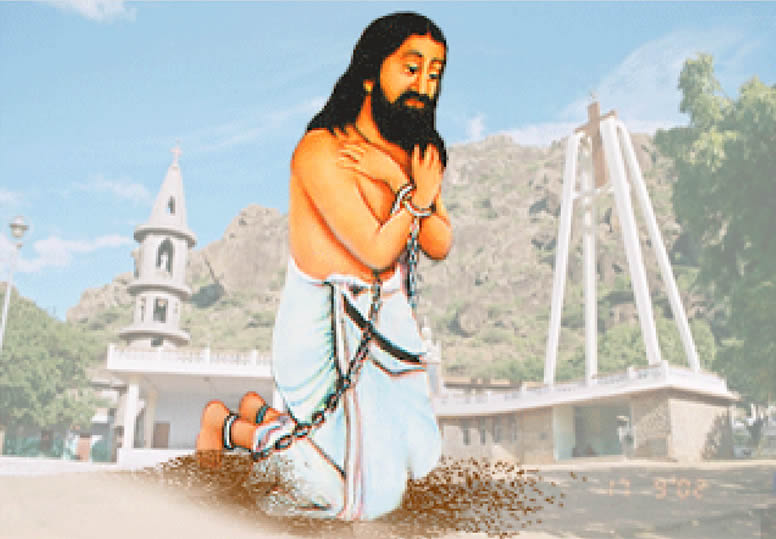 Nearly 3,000 holy men and women have been canonized as saints by the Roman Catholic Church since the practice began in 1234. Some of them were born, died, or lived in India. Best known among them are St. Thomas the Apostle (Mar Thoma), the Apostle of India, who allegedly came to Tamilakam, present-day Kerala, and was martyred on St.Thomas Mount in Tamil Nadu; St. Bartholomew the Apostle, who did missionary activity in the region near Bombay on the Konkan coast; St. Pantaenus, a Greek theologian and a significant figure in the Catechetical School of Alexandria who lived as a missionary in India; St. Francis Xavier (Francisco de Jasso Azpilicueta), Cofounder of the Society of Jesus (Jesuits); and most recently St. Mother Teresa of Calcutta (Anjëzë Gonxhe Bojaxhiu) Founder of the Missionaries of Charity.

In the long list of saints, the Vatican has decided to include the name of
the 18th-century Indian martyr Devasahayam Pillai, who was canonized by his Holiness Pope Francis during a canonization Mass in St. Peter’s Basilica, Rome on May 15, 2022.

Devasahayam Pillai (named Neelakanda Pillai at birth) was born on 23 April 1712 at Nattalam, in the present-day Kanyakumari District in South India. He was raised with Hindu beliefs and traditions and went into the service of the royal palace as a young man, where he was soon put in charge of state affairs as an official.

After the Kulachal war, he befriended with the Dutch captain Eustacheus Benedictus De Lenoy, who, was caught as a war prisoner. De Lenoy was believed to be instrumental in Pillai’s conversion to Christianity. He was baptized as a Catholic Christian by a Jesuit priest in 1745 and assumed the name Devasahayam which is Lazarus in the local language.

According to church chroniclers, Pillai’s conversion was taken as an affront by the feudal lords of his time, who repeatedly persuaded him to give up his new faith. False charges of treason and espionage were brought against him as Pillai stood firm in his faith. He was divested of his post in the royal administration, imprisoned and subjected to harsh persecution. He was arrested and tortured for three years and finally he was executed on January 14, 1752.

Devasahayam Pillai’s tomb at St. Francis Xavier Cathedral in Nagercoil is today an attraction for a large number of faithful Christians from all over India.

By granting sainthood, the Roman Catholic Church recognises that the saint is in heaven. After the canonisation, worshipers may pray to this saint.