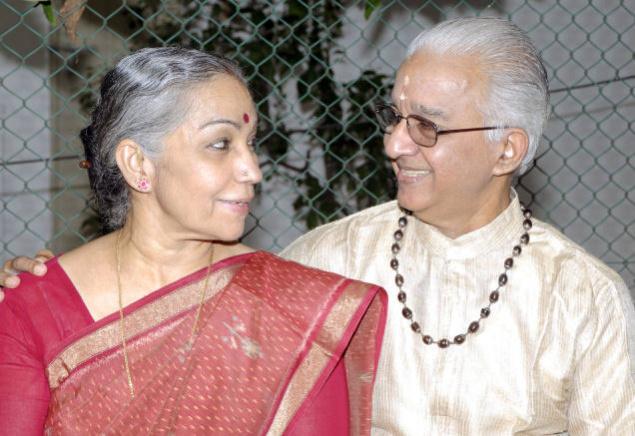 Natyacharya Vannadil Pudiyaveettil Dhananjayan with his wife Shanta Dhananjayan, honoured by H.E. the President of India Mrs. Pratibha Patil  with the highest honor Padmabhushan in 2009, visited Greece in April 2016. These two luminaries, based in Chennai, have devoted their lives to the advancement and promotion of Indian classical dance Bharata Natyam.

The legendary dancing couple of India was welcomed by their unique Greek pupil Leda Shantala in a special event on Friday, April 22, 2016 at 17:30 – 20:00, at Shantom Cultural Center

The event was not open to the public, and took place in the presence of chosen guests: Her Excellency the Αmbassador of India Ms Manimekalai, other embassy officials, scholars, instructors and students of yoga and dance in Shantom.

Leda Shantala offered “Arati” – the traditional Indian ceremony, where flame and incense are offered while hymns are chanted in praise of the Gurus who represent the light of knowledge – and two items of classical Indian dance Bharata Natyam. The first was a Pushpanjali, dedicated to lord Ganesha, chosen by Leda because (at the beginning, during the invocation, and at the end during the rhythmical patterns), one can hear the voice of Master Dhananjayan. The second one, a tillana (since renamed Nritta-angahaaram by V.P.Dhananjayan), part of the production of Shakuntala (1990).

Introductory speeches where held, complimentary gifts were offered and the evening ended with a rich buffet with Greek traditional food, where everybody mingled with great enthusiasm.

See below the video from this function