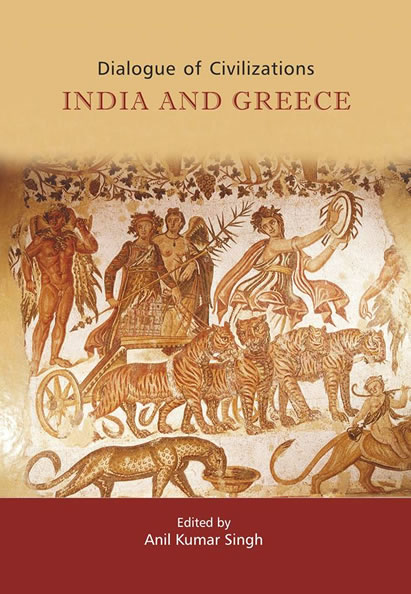 India representing the Eastern consciousness, and Greece representing the Western, had been in close contacts since the remote antiquity. Their contribution and striking similarities in the domain of science, philosophy, mythology, art and literature are well-known. In fact, there can be no true comprehension of either of them, without understanding the other.

With Alexander and following him the assimilation of Bactrian Greeks in Indian population, the two civilizations had become still closer to each other. The flourishing trade contacts between India and the Greco-Roman world further provided the opportunities of interaction between the two. This led to the exchange not only of various products but also of thoughts and ideas.

The present volume contains scholarly research on and related to the exchange of thoughts and ideas between the two great civilizations of India and Greece. This volume is the result of academic works of learned scholars from the fields of Classical History, Archaeology, Philosophy, Literature, Art and Numismatics. These essays have been selected from the papers presented in two different international seminars at the Greek Chair, Jawaharlal Nehru University in the years 2014 and 2017.

The volume is a significant contribution to the field of Indo-Greek studies and is valuable for students and scholars alike.

1. Who Were the Indo-Greeks?
— Frank Lee Holt
2. Vedic Roots of Hellenism
— DayaNathTripathi
3. World of Hellenism
— UdaiPrakashArora
4. Perspectival Interface: Indian and Greek Philosophy –
Dialogue, Dialectic, Foundationalism, Scepticism
and Hermeneutics
— RaghvendraPratap Singh
5. Plato, Aristotle and Indian Aesthetics: Reinventing a Theory
of Universals and Absolutes
— BhavatoshIndra Guru
6. Aquinas as Aristotle’s Commentator: A Case of Simulation
and Reinterpretation of Greek Philosophy During the
Middle Ages
— Mariano Iturbe
7. Can a Sceptic be Called an Escapist?
— Pratibha Sharma
8. On the Nature of Aristotelian and Kautilyan State
— Atul Kumar Sinha
9. Greek and Indian Mind on the Nature of Universe through
Some Linguistic Observations
— A.L. Katonis
10. The Interaction of the Past and the Racism of the Present,
East via the Greeks
— Tarek M. Radwan
11. Menander’s Concern for Buddhism: An Observation
— RenuShukla
12. Hellenistic Influence in the Representation of Life Story of
Buddha in GandhŒra Art
— Vinay Kumar
13. The Mughal Sikander, Influence of the Romance of
Alexander on Mughal Manuscript Painting
— DipanwitaDonde
14. A Study of Indo-Greek Coins at Jhajjar Museum
— PriyaSaxena
15. Book 4 of the Mahabharata: Some Methodological Reflections
on the Use of Greco-Roman Sources
— Fernando Wulff Alonso
16. Centuries of Renaissance and Reason: Light from Greece
and India in France
— Sushant Kumar Mishra
17. Althusserian (1918-1990) Critique of the Platonic Notion
of Philosophy
— BaviskarSharadPralhad
18. Assertion of Thymosin Anouilh’s Antigone
— Sanjay Kumar

Dr. Anil Kumar Singh (Born 1974) studied at MJP Rohilkhand University, Bareilly; CCS University, Meerut; University of Ioannina and Aristotle University of Thessaloniki, Greece. He holds Ph.D., MBA and MA Degrees and has attended courses in Modern Greek Language, Literature and Culture Studies.
He got scholarships from Indian Council of Historical Research and State Scholarship Foundation, Greece for his academic research. He is Managing Editor of Janitihas, the Journal of People’s History Society and is also associated with Yavanika, the International Journal of Indian Society for Greek and Roman Studies as an Editor.
He has published many research papers/articles in reputed journals and have attended and organised many national and international seminars and conferences. He worked as Principal & Lecturer at Nehtaur Degree College, Bijnor (2005-2007), Lecturer at Faridabad Institute of Technology, Faridabad (2007-2009), IKY Post Doctoral Research Scholar (2009-2010) at University of Ioannina, Greece, Assistant Professor at
Deep Institute of Engineering and Technology and Group Institutions, Nuh (Haryana). At present he is working as an Assistant Professor at the Greek Chair, School of Language, Literature and Culture Studies, Jawaharlal Nehru University, New Delhi.