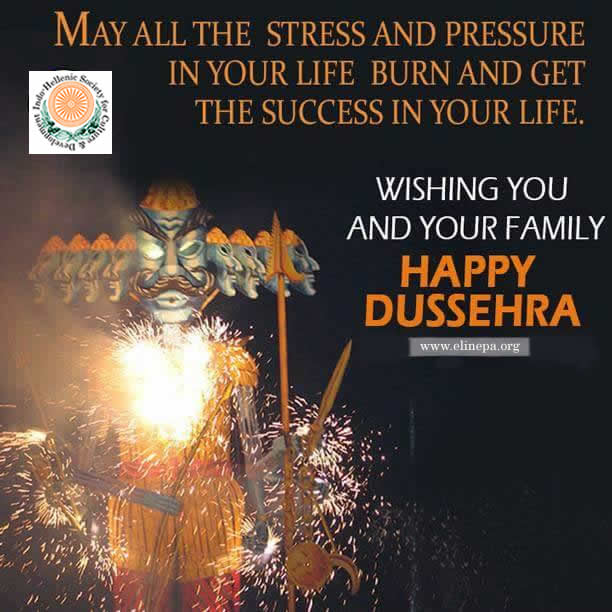 Dussehra or Dashara (Sanskrit: दशहरा) is an important Hindu festival celebrated in a variety of ways in India and Nepal. The day marks the victory of Durga over the demon Mahishasura after a fearsome fight that lasted for ten days and nine nights (Navratri). During this period observers fast and immerse idols of goddess Durga. On the last day they feast and celebrate, visit friends and relatives and exchange gifts.

Dasha Hara is a Sanskrit word which means removal (hara) of the ten (dasha) bad qualities within human character. These are: The festival, also known as Vijaydashami (Sanskrit: विजयदशमी), marks  also the victory (vijaya) of Rama over Ravana and the rescue of Sita  on the tenth day (dasami)  of the brighter fortnight  of the month of Ashwina, according to the Bikram Sambat Hindu calendar. In the Gregorian calendar, the festival falls between mid-September and mid-October. Rama’s victory over the ten-headed demon signifies the victory of the divine spirit over the ten senses of perception and action. Plays based on the Ramayana (Ramlila) are performed at outdoor fairs, and effigies of Ravana are burnt on bonfires during the last night. Diwali, the Festival of Light, is celebrated twenty days after Vijayadasami.