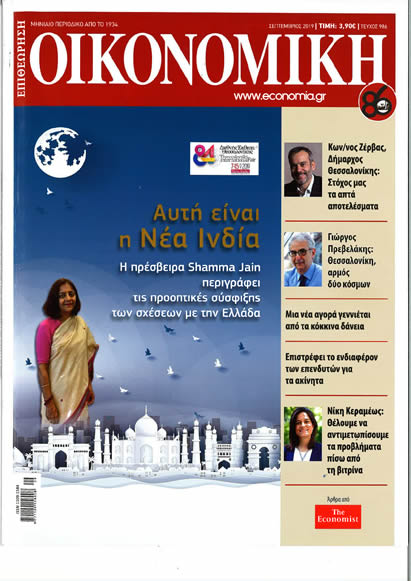 India is the honored country at the 84th Thessaloniki International Fair, and on this occasion the Ambassador of India to Greece Ms. Shamma Jain gave an extensive interview to Ms. Lalela Chrysanthopoulou for the “Economiki Epitheorisi” magazine (Issue 986, September 2019). In her interview, the Ambassador describes the “New India” with the rapid economic and technological development, as well as the prospects for closer relations with Greece. In terms of trade, the Indian Ambassador states, there is an interest from Greece in importing mangoes and tea and in India for importing olive oil and fruits. Other important areas of cooperation are shipping, Greek ship recycling, renewable energy sources, the pharmaceutical industry, and tourism.

The ambassador also refers to the long-standing historical relationship that connects the two peoples and their common characteristics, which favor the building of friendly and cooperative relations. “Indians are warm and emotional, like Greeks. When you have an Indian partner it is a life-lasting relationship,” says Ms. Shamma Jain.

The September issue also features an article by George Manettas entitled “An Untapped Treasure of the Indian Market”, which deals with Greece’s small but huge prospects for trade with India, and the existing opportunities for Greek exports and tourism.

The Economiki Epitheorisi Tribute to the TIF also includes an article by Kostas Bliatkas on “Digital Greece and other Miracles of the 84th TIF.” It also hosts an interview with the new Mayor of Thessaloniki, Mr. Konstantinos Zervas, and an article on Thessaloniki as a two-world bay.