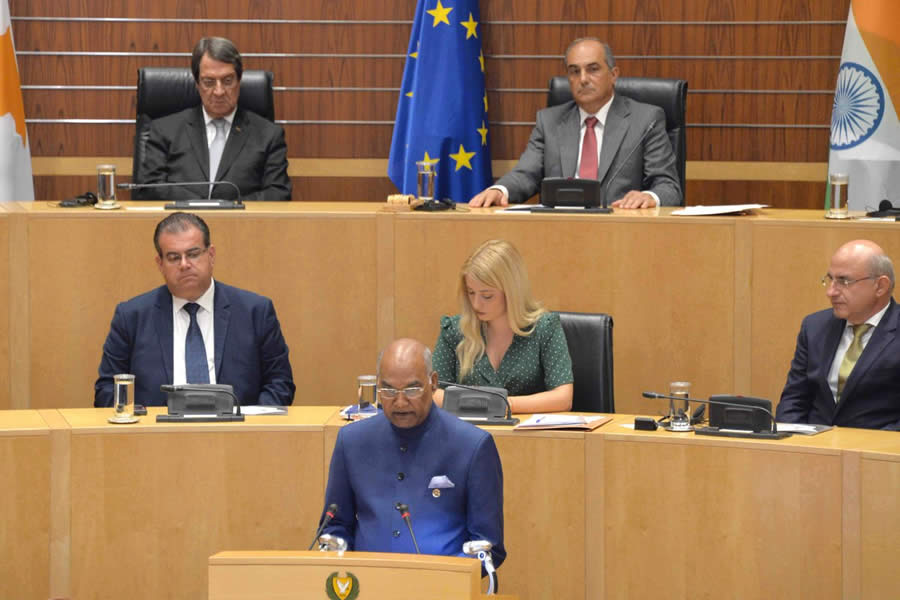 1. It is a happy feeling to be among friends. In India, we consider the Republic of Cyprus as not just a friend but one of our most steadfast partners in the international community. That is why it is a matter of pride for me to be addressing the legislative forum of your nation. This invitation is an honour for India and a personal privilege for me.

2. I was touched by the enthusiastic welcome I received when I entered this grand building. I would like to thank the President of the House of Representatives and the Members of the House for this gesture. And I would like to thank the people and government of Cyprus, led by the President of Cyprus, for the extraordinary warmth with which my delegation and I have been treated since we landed yesterday afternoon.

3. This is my first visit to Cyprus. The landscape and the sheer beauty of your country have left me dazzled. There is something about the waters of the Mediterranean and there is something about the clear air here that is so calming and so charming. It is not just the warm sun that reminds me of home. It is also our shared values, symbols of which are everywhere, including in this House.

4. These values and symbols exist in the form of the legacy of democracy that both our countries have adopted. They are present in the mutual respect for each other’s founding figures. In New Delhi, a major road is named in honour of the venerable Archbishop Makarios. Shortly before coming here, I paid tribute before a bust of Mahatma Gandhi placed in the adjoining park. Mahatma Gandhi was not only the leader of our freedom movement and that of the entire Indian subcontinent. He was also an inspiration for anti-colonial struggles and for upholding human dignity and liberty everywhere.

5. In India, we fondly remember that about 50 years ago Cyprus issued two postage stamps to commemorate Mahatma Gandhi’s birth centenary. These stamps are still cherished by collectors. It is a fine coincidence that my current visit is taking place only a few weeks before October 2 nd , when we begin the two-year celebrations of the 150th birth anniversary of Mahatma Gandhi. Figures like Gandhiji and Archbishop Makarios don’t belong to any one country. They are part of the heritage of humanity.

6. Relations between Cyprus and India are old, deep and have multiple facets. As ancient civilisations, our first priority is our people. The strong connection between the citizens of Cyprus and India is the most important source of our bilateral energy. From people-to-people contacts, we build economic and trade links, educational and intellectual connections, and a fruitful bilateral partnership. Then of course are issues of common concern and our mutual commitment to peace, security and sovereignty. This takes us to the multilateral sphere and to global matters, where inevitably we find ourselves on the same side. In fact, there are hardly any major issues on which Cyprus and India disagree.

7. India’s overriding mission is its economic growth and modernisation, with the fruits of development reaching all sections of our people. Cyprus, as a trusted partner and as one of the largest investors in India, is critical to this process. India is at an exciting juncture and offers appealing business opportunities. Statistics released just before I left New Delhi said that India’s GDP had grown at a scorching 8.2 per cent in the previous quarter. This is part of a trend of high growth over the past few years. It has made India the world’s fastest-growing large economy.

8. This has happened due to determined efforts and policy initiatives taken by the government to make India one of the world’s most open destinations for investment, a leading hub of technology start-ups, and an easier place to do business. India’s ranking in the World Bank’s Doing Business Report 2018 showed an improvement of 30 places in one year. It was the sharpest rise for any nation. In the Global Innovation Index, India has improved 24 places in the past three years – from 81st in 2015 to 57th in 2018.

9. Tax reforms to galvanise India’s widespread manufacturing and business capacities and large domestic market have also helped. The implementation of the Goods and Services Tax has led to uniform, simpler and digitally-enabled taxation in all of our 29 states. It has integrated the country into one business system. This is a historic achievement that can be compared to bringing the European Union into a common fiscal framework. There have been other measures too. The enactment of the Insolvency and Bankruptcy Code has made it easier for non-performing businesses to exit. India is also striving to create a cleaner economy. This is both a domestic and a global problem. In this context, the agreement signed earlier today between the Financial Intelligence Unit of India and the Unit for Combating Money Laundering of Cyprus will be useful for both of us.

10. Massive outlays and attractive and viable projects are evident in the Digital India mission – which is taking broadband connectivity deep into rural India; in the Smart Cities mission, aimed at urban revitalisation; and in key infrastructure sectors such as power and energy, highways, and ports and shipping. India is also promoting tourism in a big manner, including by way of simplifying visa provisions and augmenting tourism infrastructure and facilities.

12. Mahatma Gandhi often spoke of the Indian village as an organic, integrated entity, where everybody, every family, was part of an interlinked chain and contributed to each other’s prosperity as well as to the prosperity of the community. This thinking is rooted in the ancient traditions of India. Through all these years, and in all our endeavours, it has continued to inspire India. When we think for India and when we act for India, we try and think and act for the world. We are clear in our belief that the global village too is an organic, integrated entity, where everybody, every nation, is part of an interlinked chain and contributes to each other’s prosperity.

13. I will give you two examples. First, Indian research laboratories and companies have developed impressive capacities in pharmaceutical manufacture. Yet, we don’t look upon this as simply business. It is our contribution to global healthcare, while making for a viable industry as well. High-quality Indian generics and vaccines have driven down prices, reduced costs of healthcare and helped communities across the world. This is a field in which we would be happy to share our experiences and capacities with Cyprus.

14. Second, earlier this year India co-founded and hosted the inaugural conference of the International Solar Alliance. The secretariat of the ISA is located in India and this institution is central to India’s effort to mobilise international resources and technologies to combat climate change. The scope for renewable energy is immense and will be crucial to checking rising temperatures and rising seas. As geographies marked by long coastlines as well as being blessed by sunshine, there is much Cyprus and India can do together. We invite you to become part of the ISA family.

15. As responsible nation-states, both Cyprus and India are alive to the challenges in the international system. As civilisations, we have been open societies and trading economies for millennia. The continued relevance of a rules-based international order, for trade, for our sea lanes and the global maritime commons, and in other domains is an article of faith for us. The salience of national sovereignty and the essential need to defeat radicalism and terrorism unites us. In this regard, India has called for finalising the Comprehensive Convention on International Terrorism at the United Nations and we count on your support. I would also like to thank Cyprus for its unstinted backing of India’s candidature for an expanded UN Security Council as well as for the Nuclear Suppliers’ Group.

Members of the House

16. Exchange of visits and interactions between our countries are frequent and much looked forward to. I am the fourth President of India to visit Cyprus ; and only a year ago the President of Cyprus graced us with his presence. It is not common in diplomacy for Presidents of two countries to exchange visits in successive years. That this has happened is an indicator of how special our relationship is. Our Members of Parliament too have a tradition of meeting each other and sharing thoughts on the deepening of democracy and of development. I commend this and invite each one of you to visit India. Allow us to at least attempt to give you the type of hospitality that you have so generously given my delegation and me – and through us to the people of India.

17. With those words, I once again thank you for allowing me the opportunity to address this House. I wish all of you, and I wish the people of Cyprus, all the very best for the future.