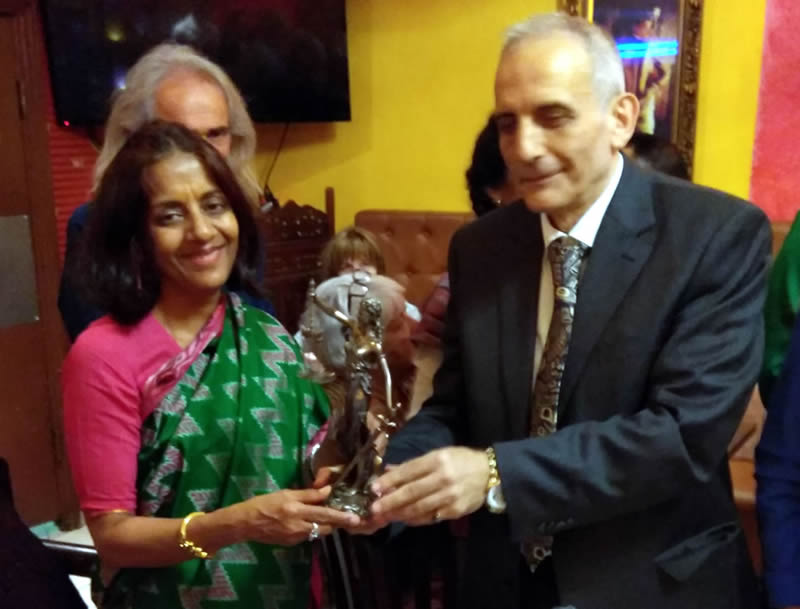 The Hellenic-Indian Society for Culture and Development (ELINEPA) organized its annual Indian Dinner on Sunday, May 27, 2018 at Royal Indian Chef Restaurant in Athens.

The Guest of honor, H.E. Ms. Shamma Jain, Ambassador of India to Greece, thanked the attendees for their love for India and Indian culture and expressed the willing to contribute to the further improvement of Greek-Indian cultural relations by organizing an Indian cinema festival and by supporting the translation of books from Indian languages into Greek and Greek to Indian languages. She also referred to the upcoming visit of the Honourable President of the Republic of India to Greece and its importance for the further improvement of bilateral relations between the two countries.

The menu was pure vegetarian from the rich Indian cuisine. The dinner was followed by a lottery with prizes from our sponsors:

Photo: President of ELINEPA Dimitrios Vassiliadis presents a statue of Themis, protector of divine law and order,  to H.E. Ms. Shamma Jain, Ambassador of India to Greece during the ELINEPA’s Annual Indian Dinner