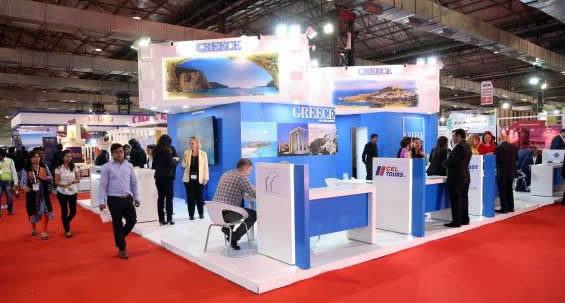 The Greek National Tourism Office (GNTO) won the Best Design Award during the largest International Tourism Fair of India «Outbound Travel Mart» (OTM) held in Mumbai from 21 to 23 February 2017. It was the first time that Greece and the Greek Tourism Organization participated with a stand at the exhibition, together with such exhibitors as HATTA, tour operators, hotel chains and the municipal enterprise of Kavala “DIMOPHELEIA”. Greek Tourism Minister Mrs. Elena Kountouras, Secretary General of GMTO Mr. Dimitris Trifonopoulos and Ambassador of Greece in New Delhi Mr. Panagiotis Kalogeropoulos attended the Fair  and held separate meetings with the CEOs of leading tour operators of India and  tourist offices  in order to strengthen the tourist flow from India to Greece. The Greek Minister also discussed the prospects for the development of tourism cooperation in a meeting with the President of the Indian Chamber of Commerce (IMC), Mr. Deepak Premnarayen.

The Minister and the Greek officials attended a special event organized by GNTO for the promotion of Greece, where the invitees were 20 tour operators and representatives of the Indian travel industry. They also organized a press conference where Mrs. Kountouras presented Greece as a highly attractive destination for the traveling public of India and gave an interview to the popular TV channel ZEE News. Secretary General of GNTO Mr. Dimitris Trifonopoulos participated in the main press conference of institutional representatives and presented the Greek tourist product to the Indian press. He also met with tour operators, while under the «Workshop on Film Industry and Film Shoot Facilitation» he had contacts with agents of the Bollywood industry and discussed the facilities offered to Indian producers for shooting films in Greece.

1156 exhibitors, including 50 National, 30 Tourism Organizations, 496 tour operators and travel agencies, 13 regions of India participated in OTM.  India being a leading and dynamically developing outbound tourist market is of high importance for the Greek tourism.