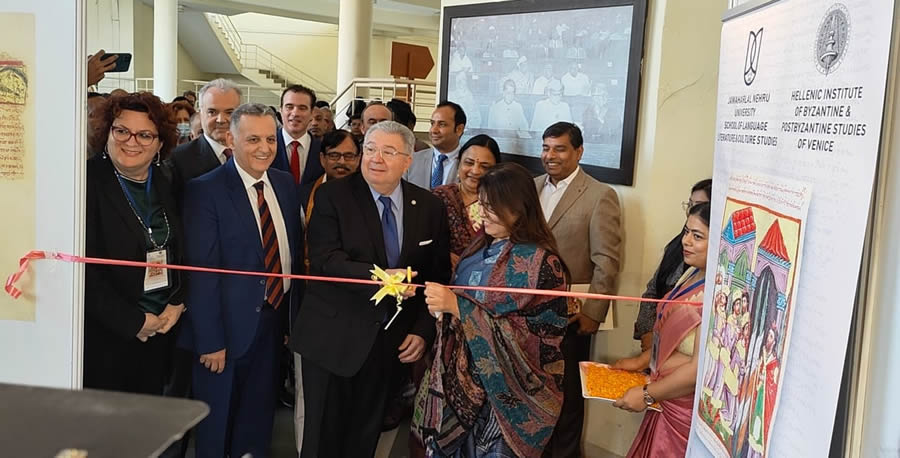 A unique photographic and digital exhibition of the famous Byzantine illustrated novel about the life of Alexander the Great “Code 5” was inaugurated on December 12, 2022, at Jawaharlal Nehru University (JNU) in New Delhi by the Secretary-General for Greeks Abroad and Public Diplomacy, Mr. John Chrysoulakis, together with with the Indian Deputy Minister of Foreign Affairs and Culture Ms. Meenakshi Lekhi.

Present at the opening of the exhibition were the Ambassador of Greece to India Mr. Dimitrios Ioannou, the High Commissioner of Cyprus Mr. Agis Loizou, the President of the Hellenic Institute of Byzantine and Post-Byzantine Studies in Venice Prof. Vasilios Koukousas, the Vice-Chancellor of JNU Prof. Santishree Dhulipudi Pandit, the Vice-Rector of the Aristotle University of Thessaloniki Prof. Efstratios Stylianidis, the President of the Indo-Hellenic Friendship League Prof. Bharat Gupt, the President of ELINEPA Prof. Dimitrios Vassiliadis, the former ambassador to India Mr. Ioannis Zepos, the distinguished historian Prof. U.P Arora, as well as a number of personalities from the academic, cultural and diplomatic world. The guests were guided to the exhibition by Dr. Flora Karagianni, Director of the European Center for Byzantine and Post-Byzantine Monuments (Thessaloniki). The exhibition remained open to the public until December 16, and hundreds of students and professors of the University, as well as a large number of people and journalists had the opportunity to visit it.

This impressive exhibition was organized by Jawaharlal Nehru University (JNU) in collaboration with the Hellenic Institute of Byzantine and Post-Byzantine Studies in Venice on the occasion of the international conference “The Hellenic World and India: History, Culture and Trade from the Hellenistic period to the modern era (4th century BC – 18th century AD)” which took place at the Indian University with the participation of numerous of academics and researchers from Greece, India and other countries,

The Hellenic Institute of Byzantine and Post-Byzantine Studies in Venice has a number of relics, images, and manuscripts, among which, perhaps, the most important is “Code 5”. It is the only surviving medieval manuscript in the world that extensively illustrates the life of Alexander the Great up to his death (including scenes from his passage through India). The manuscript was copied for the emperor of Trebizand, Alexios III Megas Komninos, who within his 40 year reign, between 1349 and 1390, was distinguished, inter alia, for being patron of the Arts and Literature.