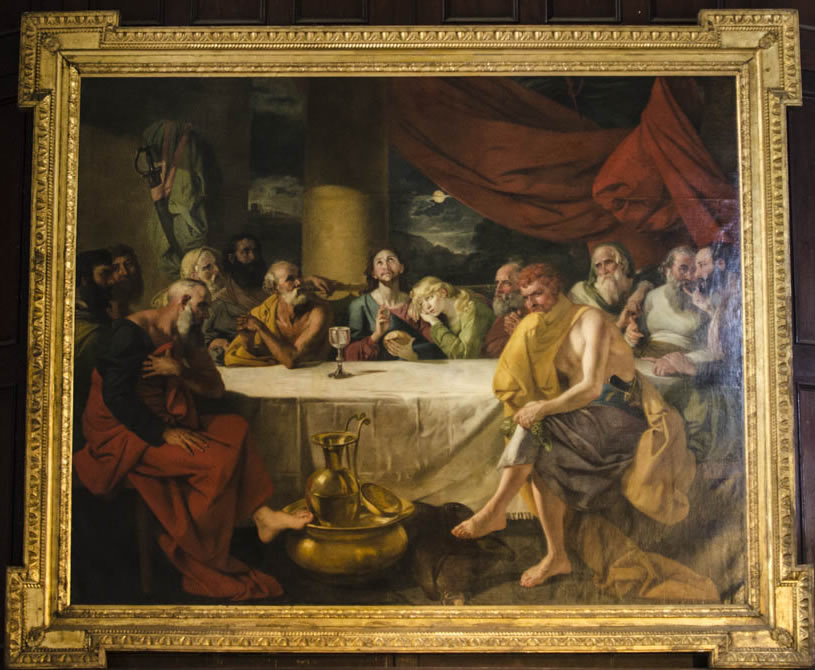 One of the most famous artworks now hanging on the walls of the St. John’s Church, Kolkata (Calcutta) is the painting of The Last Supper by the German neoclassical painter Johann Zoffany (1733 – 1810)  after Leonardo da Vinci’s masterpiece. Zoffany completed his Last Supper in 1787, but the painting that we see today in the church has been carefully restored in the year 2010. The uniqueness of this painting is that Zoffany used real people from the fashionable Anglo-Indian society to portrait Jesus and his twelve disciples.

Father Constantinos Parthenios, the priest of the Greek Community’s church in Kolkatta,  is said to have served as the model for the Christ. Other famous subjects involved are. W.C. Blacquiere, the effeminate police magistrate of Calcutta. who was selected for John and infamously auctioneer William Tulloh was used for Judas. Zoffany added some small features with a local Indian flavor to this painting, like the Bisti (goatskin water bag) and an Indian sword thus making it really different from the rest of the Last Supper paintings.

Father Constantinos Parthenios (d. 1803), a monk of Mount Sinai and a native of Corfu, was the first priest to officiate in the Greek Orthodox Church dedicated to The Transfiguration of Christ (Η Μεταμόρφωσις του Σωτήρος) on Mount Tabor, that was built in the year 1780 in a suburb known then as Dhee Calcutta, which was later renamed Amratollah. Father Constantinos Parthenios was a charismatic orator and became very popular among the Christian communities in Kolkata.

The St. John’s Church is one of the first public buildings to be erected by the East India Company after Kolkata became the effective capital of British India. Inaugurated in 1787 it served as the Anglican Cathedral till 1847, when newly built St. Paul’s became the new cathedral. James Agg, of Bengal Engineers, was the chief architect of the church which was modeled according to the St. Martin in the Fields Church in London.