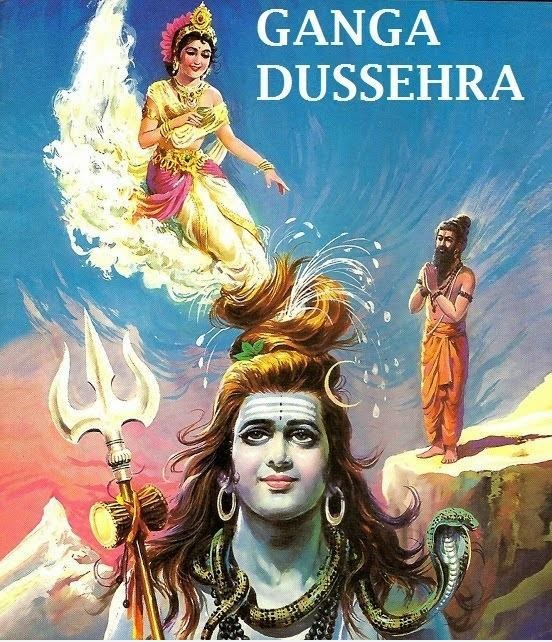 Ganga Dussehra is a Hindu festival dedicated to Goddess Ganga. It is believed that Ganges, the most holy and sacred river in India, descended from heaven to earth on this day. Ganga Dussehra takes place on the  10th day (dashami) of the waxing moon of the Hindu lunar month Jyeshtha (May – June in Gregorian calendar). The festival celebration lasts ten days, including the nine preceding days. On Ganga Dussehra devotees gather at the banks of the Ganges and worship the holy Mother Ganga with rituals (aartis) and prayers. They also offer charity (dan-punya) and take bath in Ganges, which is considered highly auspicious. The most popular celebrations take place in the cities of Varanasi, Allahabad, Haridwar,  Rishikesh and Patna.

Before coming to the Earth, the Goddess Ganga was residing in the water pot (kamandal) of Lord Brahma, but sage Bhagiratha performed penances and prayed to Brahma that Ganga comes down to Earth. Brahma answered to his prayers and asked Ganga to go down to the Earth and then on to the netherworld to save the souls of Bhagiratha’s ancestors. Ganga felt insulted and decided to sweep the whole Earth away as she fell from the heavens. Alarmed, Bhagiratha prayed to Lord Shiva and asked his help in breaking up Ganga’s descent. Ganga fell on Shiva’s head and trapped in his hair she falls down in small streams. Along with herself she brought the purity of heaven to the Earth. Ganga created a different stream to flow to the nether-world and she is the only river to flow in all the three worlds –  heaven (Swarga), Earth(Prithvi) and netherworld (Patala). Thus, she is known in Sanskrit as Tripathagā (one who travels the three worlds).

Another important festival dedicated to Goddes Ganga is  Ganga Jayanti when the Goddess was reborn as the daughter of Rishi Jahnu. Ganga Jayanti is celebrated on the 7th day (saptami) of the waxing moon of the Hindu lunar month Vaishakha (April – May in Gregorian calendar).