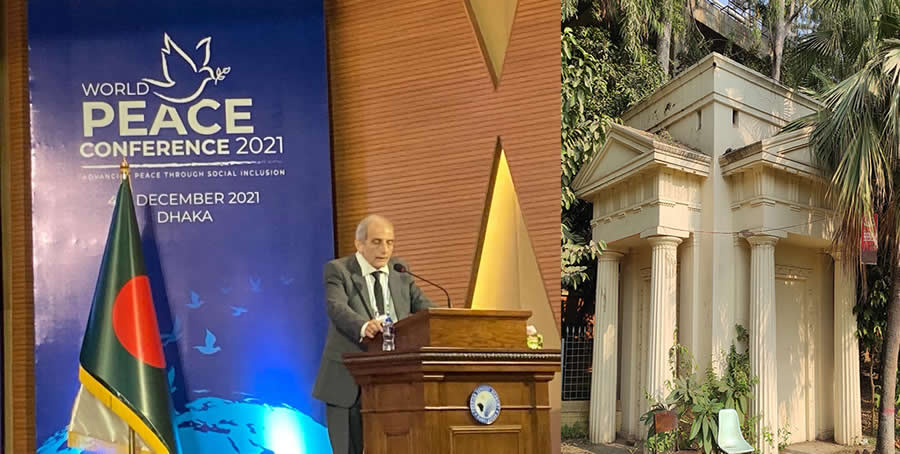 By Dr. Dimitrios Vassiliadis
(Speech delivered at the World Peace Conference, 4-5 December 2021, Dhaka, with some additions).

It is a happy feeling to be among friends who share common beliefs on human and social values and the same vision for the future of the humanity. I would like to thank the people and the government of Bangladesh, led by the Honourable Prime Minister Hasina Sheikh, for their sincere efforts to promote World Peace and for the extraordinary warmth with which I have been treated since I landed in this beautiful country. Your invitation is an honour and a personal privilege for me.

This is my first visit to Bangladesh and I have been touched by the  enthusiastic welcome and hospitality, which is one more proof for me  that the people of Bengal continue to maintain not only a rich Sanskrit vocabulary in their language but also the ancient tradition as it is expressed in the Upanishadic instruction “Atithi Devo Bhava”.

This year Bangladesh celebrates its 50th anniversary of Independence, but this does not mean the country was born from zero. The advancement of civilization in this land dates back for at least four millennia and has played an important role in the history of the Indian subcontinent. The history of Bangladesh is intertwined with the history of Bengal and the surrounding regions of South and Southeast Asia.

The pre-Alexandrian Greek historians, like Herodotus, Hecataeus, Ktesias  and others, used the term ‘India’ to refer to the region around the Indus river, but from the time of  Megasthenes and afterwards the term was used to designate the entire Indian subcontinent.

The land of Bangladesh became part of several ancient pan-Indian empires, including the Mauryans and Guptas and later on of the Muslim Sultanates and of the British India. During these historical periods the people were intermixed freely and interacted with the major religions and cultures of the subcontinent, like Hinduism, Buddhism, Jainism, Islam and Christianity.

It is, therefore, very difficult to separate the history and the culture of the peoples on the basis of the political borders of the present-day states. They share common beliefs, languages, foods, dresses, festivals, habits and music. They are interwoven to such an extent that most of the universities in the world treat them as one family-subject in South Asian Departments.

The history of the Indian peninsula from the ancient times up to the later partition of the last century is a common heritage that belongs to all people who live in South Asia, whether we call them Bangladeshis or Indians, Nepalis, Pakistanis, Shri Lankans, etc. This, of course, does not mean that there are no peculiar characteristics between different regions.

Within this understanding, we can say that the relation of Greece with Bangladesh as a shareholder of the ancient Indian history and culture goes back to more than 2500 years. We all know the three-century-long impact of the Indo-Greek kingdoms on the art and culture of the Indian subcontinent.

However, what is of special importance in our history with  Bengal is the presence of the Greek merchant Community that flourished for almost three centuries in Kolkata, Dhaka, Narayanganj and other places. The Greek monument at the Teacher-Student Center (TSC) of the Dhaka University, as well as the buildings of the Bangladesh Academy for Rural Development in Comilla District and the Home Economics College, which were designed by the famous Greek architect Constantinos Doxiadis, are preserved until this day and remind us of their historical presence.

As both Greece and Bangladesh celebrate this year the beginning of their struggle for independence on the 25th of March of 1821 and 1971 respectively, it is important to acknowledge the support of the Greek immigrants and of the people of Bengal to the mainland Greeks who revolted against the Ottoman Empire.

Bengali scholars and poets, like Khettro Mohun Mookerjea and Henry Louis Vivian Derozio, were among the first to write in favor of the Greek revolution, expressing their own hopes and agony for Independence, as both countries had suffered from foreign occupation. It was because of this understanding that Greece became later one of the first countries to recognize the independence of Bangladesh.

The participation of Bengali together with other troops from British India on the side of the allied forces in the First and Second World Wars comes also to underline another common element that connects our peoples – the unwavering love and devotion to the ideals of Freedom and Democracy. Many of those soldiers made the highest sacrifice in Greece and their bodies are buried with gratitude in three cemeteries in Athens, Salonica and Limnos Island.

A landmark in our intercultural history is also the visit of Rabindranath Tagore to Greece in 1926. The great poet of Bengal developed friendly relations with the Greek poets Sikelianos and Palamas and supported the idea of the re-establishment of the Delphic games. expressing his belief that the descendants of the two ancient civilizations could play a significant role in the promotion and establishment of peace in the world.

Michael Madhusudan Dutt (1824 – 1873) was the first Bengali poet and playwright to study Greek, as he wanted to write his prose version of the Iliad  “Hector Bod” (“Slaying of Hector” ),  which remains incomplete. Modern Bangladeshi scholars and intellectuals have also authored and translated into the Bengali language several historical and philosophical books, especially on Homer and Socrates. The inscription with the saying of Socrates “The only true wisdom is in knowing you know nothing” placed at the entrance of the Archaeological Museum of Bangladesh is another indication of the love of the Bangladeshi people for the Athenian sage.

Likewise, several Greeks have shown interest in the traditions of Bengal, mostly in philosophy, history and literature. The “Unfinished Memoirs” of Bangabandu have also been translated recently into the Greek language.

In the field of Arts, there are a few Graeco-Buddhist statues of the Gandhara school in the National Museum of Bangladesh and in the Museum of the Department of Islamic History and Culture at the University of Dhaka. Among the modern Bangladeshi artists who studied in Greece is the famous cartoonist Rafiqun Nabi (born 1943), better known as Ranabi, who studied  printmaking at the Athens School of Fine Arts under the Greek Government’s postgraduate scholarship in the years 1973–1976. More recently, the eminent Bangladeshi sculptor Mrinal Haque (1958-2020) created the statue of Themis, which became symbol of justice and secularism after its re-installation in front of the Dhaka Supreme Court complex.

A Greek-Bangladeshi collaboration is the video-song titled “It’s Mother Language Day,” which was written by the Bangladeshi author and diplomat Sujan Debnath who served as First Secretary & HOC at the Embassy of the People’s Republic of Bangladesh in Athens. The music is composed by the Greek musician Stavros Papastavrou, who also plays guitar and sings together with the Bangladeshi singer Nibedita Nath. Greek artist Mariva Zacharof has also presented in a photo exhibition her impressions on the hard reality of Bangladesh after a three-month trip to Bangladesh in early 2017.

However, a lot of work has still to be done. The children of the 80.000 strong Bangladeshi Community, who study in Greek schools, will be able to serve as the best ambassadors in bringing closer our countries in the future. Alexandros Kanter Bax, a Bangladeshi immigrant who served as Director General of the National TV channel ERT3, has been a pioneer in the advancement of the Greek-Bangladeshi cultural relations with the production of several documentaries in both countries. The Embassy of Bangladesh and Greek-Bangladeshi associations are organizing regularly cultural programs in Greece.

Diplomatic relations between the two countries were established in March 1972, when Greece became one of the first countries to recognize Bangladesh. Bangladesh has established its embassy in Athens in July 2009, while Greece maintains a consulate general in Dhaka. In 2013, former Greek Minister of Public Order and Citizen Protection Nikolaos Dendias paid an official visit to Dhaka. Τhe Minister of Foreign Affairs of Bangladesh Dr. Abul Kalam Abdul Momen visited Athens on 29 October 2019. This was the first-ever official bilateral visit at the level of Foreign Minister between the two countries.  Bilateral contacts between the two countries are expected to develop even further as the political climate is very good and there is a tradition of mutual support for candidacies in international organizations.

Today, as the whole world becomes more and more interconnected, we come to realize that we are all passengers in the same boat. Regional conflicts, racial and religious discrimination, the increasing gap between the rich and the poor, the climate change, pandemics and the pollution of the environment cannot be solved separately. To solve these universal problems, we must face them together.

Following in the footsteps of the Father of the Nation, it is my strong conviction that Bangladesh with its democratic principles and rich cultural tradition can become a global model of Tolerance and Peace, especially as it is the first and only Muslim-majority country in South Asia to enshrine secularism in its constitution.

Religion can be a useful path for the fulfillment of the highest aspirations of men, but with the lack of understanding of the faith and beliefs of others it ends up as a dividing force. Hence, our societies need to focus on education and teach human values and secular ethics which can appeal to everyone, deshis and videshis, religious and non-religious alike.

For all civilized societies, the dignity and liberty of individuals in an environment that will permit them to fulfill their potential and their highest aspirations is nonnegotiable. Let these ideals, which were proclaimed by our glorious ancestors, continue to guide us as we walk together in the 21st century.

Abadzi, Helen, “Glimpses of the Greek Community from the Dhaka University Gravestones,” INDIKA 2005

Ghoss, Ujjal, “Some Greek–related publications of the Greek Club Kyklos in Kolkata,” INDIKA 2020

Vassiliadis, Dimitrios Th., “Statue of Themis becomes a symbol of justice and secularism in Bangladesh,” INDIKA 2021