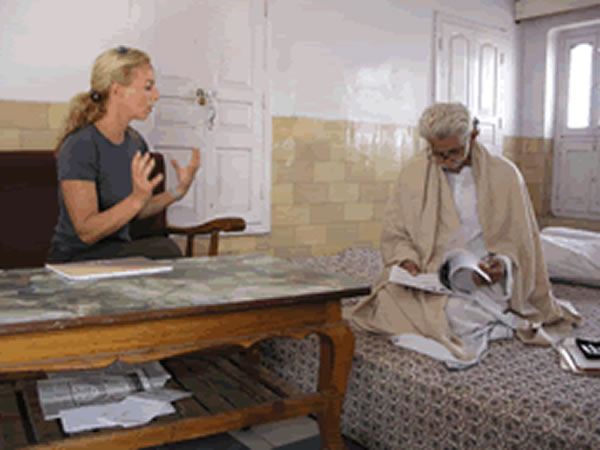 The Athenian Artist, Danae Stratou traveled by boat on the Ganga River and visited Varanasi and Allahabad amongst others cities in order to produce a documentary film on the River Ganges.  The documentary forms part of her project “The River of Life” that includes documentaries from seven major rivers of the earth: the Danube, the Amazon, the Mississippi, the Ganga, the Nile, the Niger, and the Yangtze.

Explaining the concept of the whole project, Danae Stratou points out in a poetic language that she wants to express:

…an endless moment; a moment which carries a timeless, endless rhythm;

the rhythm of the river; the rhythm that unites the whole world

and which, bears along, in its flow, all humanity.

This is the rhythm of life – and its sound, is the sound of breath.

The Athenian artist spent several days in Varanasi recording changing scenes and sounds from the banks of the river at the city’s edge as they kept changing during the day.  Mrs. Stratou had, also the opportunity to have an extensive interview with Prof. Vir Bhadra Mishra, the Mahant of the Sankat Mochan Foundation, an NGO that promotes the Clean the Ganga Project. She was informed about the serious environmental problems that the holy river of India faces today. The entire interview was recorded and she promised that after her return to Greece she would broadcast to the broader world the scenes and the voice of the people who love and worship Ganga.

The work “River of Life” was created for the exhibition Trans- Cultures organized by the National Museum of Contemporary Art in Athens (EMST), and is one of the official events scheduled for the Cultural Olympics in the summer of 2004. The exhibition  “Trans-Cultures” was inaugurated by the Greek Deputy Minister of Culture Mr. Petros Tatoulis on the 6th July in the new exhibition Space of Megaron – the Athens Concert Hall and shall be open to the public until the 31st December 2004. Afterwards, it will be transferred at the National Museum of Contemporary Art providing a permanent ‘darshan’ (holy view) of the River Ganges to the Athenian visitors.