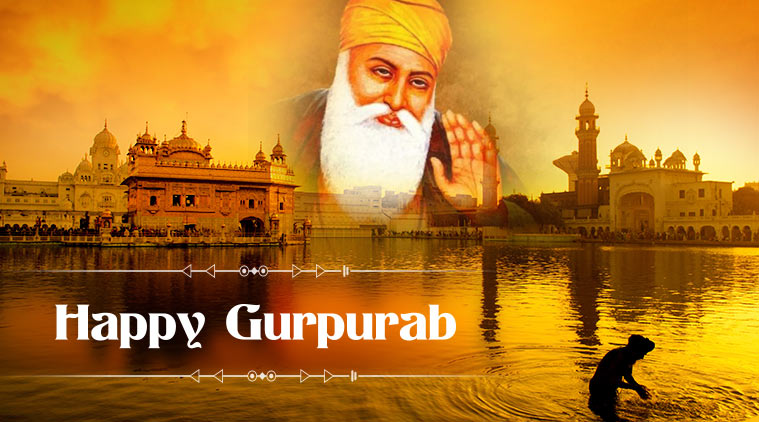 Sikhs celebrate the birthdays of all of their ten spiritual teachers (gurus) as ‘Gurpurab’ (festival or celebration of Guru).  Guru Nanak Gurpurab, also known as Guru Nanak’s Prakash Utsav and Guru Nanak Jayanti, is one of the most sacred festivals in Sikhism, or Sikhi and marks the birth anniversary of Guru Nanak (1469-1526), the first spiritual teacher (Guru) who laid the foundation of Sikhism.

GuruNanak traveled far and wide, teaching people the message of one God who dwells in everyone. His religion is based on equality, fraternal love, goodness, and virtue. His teachings are enshrined as 974 poetic hymns in the Guru GranthSahib (the sacred book of the Sikhs) and it is believed that his grace descended upon each of nine subsequent Gurus.

Guru Nanak’s birthday is celebrated on the Full Moon (Pooranmashi or Purnuma) of the Indian Lunar Month Kartik (November – December according to the Gregorian Calendar) and is a reminder for the devotees to follow his teachings and devote their life to the selfless service of the community and God.

The celebration usually includes  ‘Prabhat Pheris‘, or early morning processions at Gurudwaras (Sikh temples) and ‘Akhand Path’ (a forty-eight-hour non-stop reading of the Guru Granth Sahib). The day prior to Gurpurab, a procession, referred to as Nagar Kirtan is organized and it is led by the Panj Pyaras (Five Beloved Ones).

The Gurpurab begins at about 4 AM. with the singing of Asa Ki Vaar (morning hymns), a combination of Katha (exposition of the scripture) and Kirtan (devotional songs), in the praise of the Guru.

Special langars, or community meals are arranged at Gurudwaras by volunteers and devotees. The idea is that everyone, irrespective of caste, class or creed should be offered food in the spirit of service and devotion.

Guru Nanak Gurpurab is celebrated by the Sikh community all over the world and the celebrations are especially colorful in the Indian states of Punjab and Haryana, where a large number of Sikhs live. The Sikhs who cannot join the celebrations or live in places where there are no Gurdwaras, hold the ceremony in their houses with relatives and friends.

Guru Nanak’s Birthday is a public holiday in India.