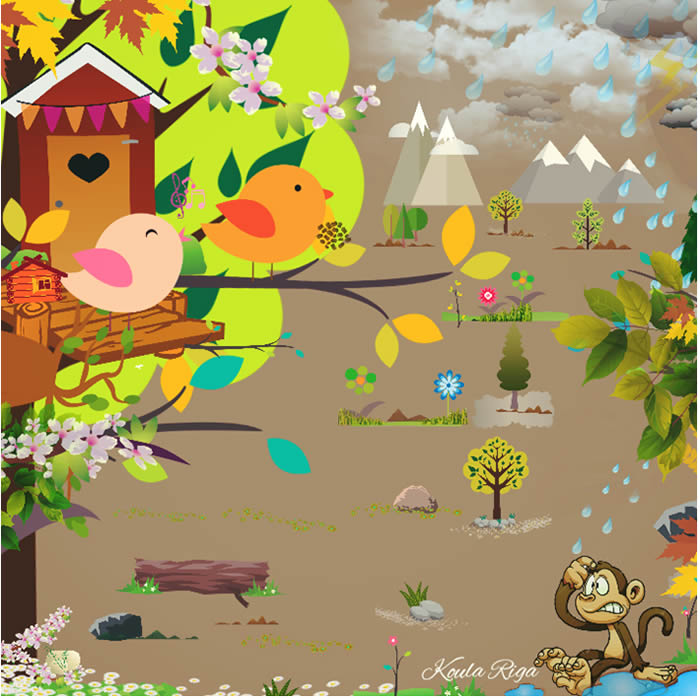 Once upon a time, two birds lived on the branches of a huge tree, deep inside a forest. They had worked very hard to build their nest. They had a comfortable home to protect them from all weather.

It was winter …One day as they enjoyed the comforts of their nest, it began to rain suddenly. Very soon a monkey went under the same tree to protect herself from the rain. The monkey was all damp and chilled to the bone …

When the female bird saw the monkey, became sad about the situation of the monkey, that she had no house to protect herself. So the bird said to the monkey: “Dear lady, your hands and your feet are similar to man. You can use them in many ways. Why don’t you make a comfortable and beautiful home for yourself? “

The monkey was disturbed by what she heard. She was not willing to listen το the advice. She suffered from rain and cold weather. So she responded angrily to the female bird: “How dare you tell me this? You are a foolish bird! Why can not you keep your mouth shut? “

But the female bird continued to give advice. She explained that if the monkey had her own home she could enjoy the comforts of the house and would not suffer from the heat, the cold and the rain. This made the monkey annoyed and become even .

The monkey thought, “What a creepy bird! she speaks as she knows everything! All the sciences and philosophies. Why she can’t stop! It makes me so angry that I feel I will react very badly! I don’t want to hear any advice. I already suffer so much from the rain and the cold.”

Although the monkey didn’t want any other advice, the bird didn’t respect what the monkey told her…She was talking to the monkey and offering her advice. Then suddenly, the monkey was very irritated and very angry, she climbed the tree and shattered the house – the nest that the two birds had build.

Give your advice only to those who deserve it, otherwise, you will become sad.

Panchatantra is a collection of teaching myths of Indian prose and poetry, starring mainly animals. The original text is in Sanskrit for Hindus and Pali for the Buddhists. The collection attributed to Pandit Vishnu Sharma dates back to most scholars around the 3rd century BC. Is based on an earlier oral tradition. Through cross-border mutations, adaptations, and translations, Patsatadra expanded by accepting many influences from other folktales of central Asia. But it continues to be the most popular moral-teaching work of Indian literature, which can only be compared to the myths of Aesop. Through the myths of Panchatantra, Indian and universal values ​​and teachings are expressed about for a wise behavior in life.

The Hellenic-Indian Society for Culture and Development publishes above the second story of Patsatantra in translation and adaptation from the original by Koula Riga.  Figures: Koula Riga

*Koula Riga originates from Skiathos island and lives in Athens. She was born in 1987, by Greek father and Indian mother. She studied sound engineer, music and painting. She likes the arts and deals with music, photography, and painting. She has been involved with the tourism and the tourist business of her family. Her love for children and Indian culture made her turn to translate Indian tales. At the same time, he is studying Hindi at the Foreign Language Center of the University of Athens, as well as cooking and confectionery at a gastronomic school in Athens.