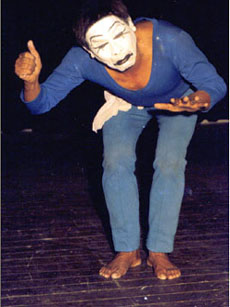 Kanglei Mime Theatre Repertory from Manipur and the Jogesh Mime Academy of Kolkata will participate in the 9th International Mime and Puppetry festival in Kilkis from 25 September  until 10 October. Groups from  Kazakhstan, Syria, Brazil, Argentina, Canada, Hungary, Italy, Germany, France, Spain, Greece and many other countries are taking part, with performances in Kilkis, Thessaloniki and Athens.

The Jogesh Mime Academy led by Jogesh Datta will present 9 short plays.
The Kanglei Mime group will perform the play  “Cheitheng (Agony)”,  based on a tale from the Ramayana epic. The group will have to stage at least five shows in Greece – three shows at Kilkis on a single day and two in Thessaloniki.