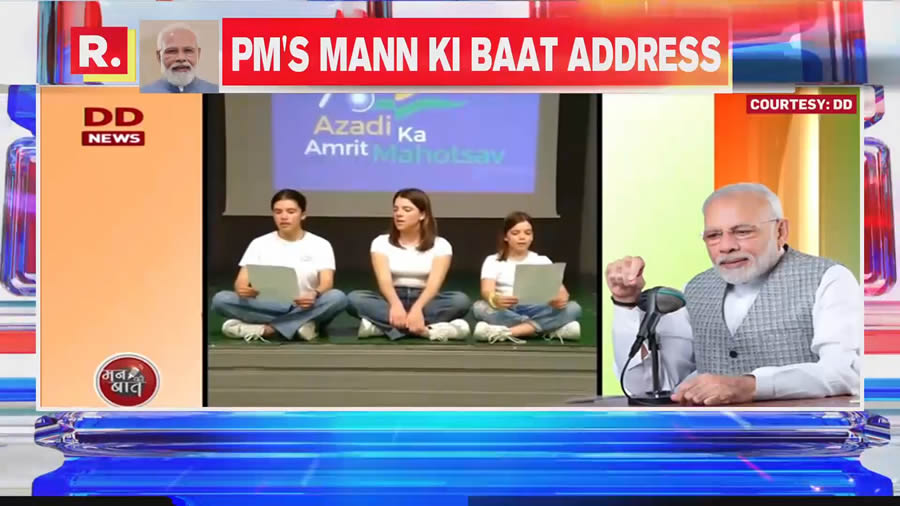 Speaking on that, PM Modi said that the spirit which is embedded in “Vande Mataram” fills the mind of the people with pride and enthusiasm. Providing details on the video, he said that the students from Greece have presented “Vande Mataram” in their High School in Illia. Appreciating the beauty of the song, he said, “The way students have sung Vande Mataram is amazing and commendable. Such efforts bring the people of the two countries closer. My greetings to the people of Greece and their teachers. I appreciate their effort during the 75th Celebration for India’s Independence (Azadi ka Amrit Mahotsav).”

He also wrote in Hindi on Twitter, “My dear countrymen, in ‘Mann Ki Baat’, now I am going to tell you something which has come from far away, across the border. It will amaze you and astonish you too!”

Vande Mātaram  is a poem written in Sanskritized Bengali  by Bankim Chandra Chattopadhyaya in 1870s. The poem was first sung by Rabindranath Tagore in the 1896 session of the Indian National Congress. The first two verses of the song were adopted as the National Song of India in October 1937 by the Congress Working Committee prior to the end of colonial rule in August 1947.

The title ‘Vande Mataram’ means “I praise to Mother”. The “mother goddess” in later verses of the song has been interpreted as the motherland of the people – Banga Mata (Mother Bengal) and Bharat Mata (Mother India), though the text does not mention this explicitly.

As an ode to the Motherland, it played a vital role in the Indian independence movement and became a popular marching song for political activism. It is honoured equally with the national anthem of India, “Jana Gana Mana”. However the Constitution of India does not have any mention of “national song”.