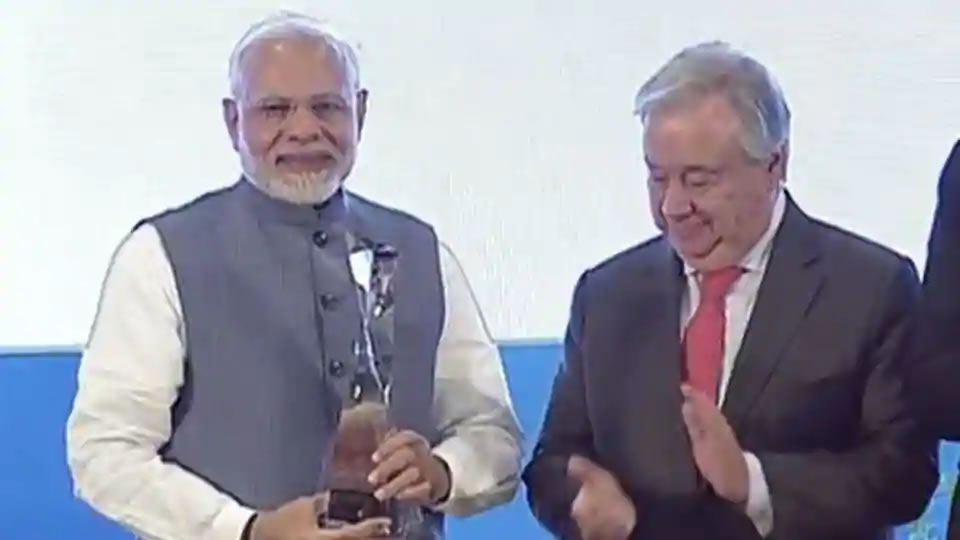 Indian Prime Minister Narendra Modi received the United Nation’s highest environmental honour, the ‘Champions of the Earth Award’ from United Nations Secretary-General Antonio Guterres, on October 3, 2018 at a ceremony in New Delhi. He is among the six individuals and organisations who got the 2018 award.

The Indian Prime Minister received the Award for his extensive efforts to ‘Beat Plastic Pollution’– including an ambitious pledge to eliminate all single-use plastic in the country by 2022. He was also recognized for his initiative ­– together with French President Emmanuel Macron – to champion the International Solar Alliance, a global partnership that aims to scale up solar energy in ‘solar-resource-rich countries’ and reduce humanity’s dependence on fossil fuels.

“I accept this award on behalf of millions of Indians who protect the environment each and every day…From fisherfolk who only take what they need or tribal communities who think of forests as their family. We will never be able to tackle climate change without bringing climate into our culture. And this is why India is taking so much action for our climate.” Modi said among others in his speech after receiving the award.

The Champions of the Earth Award is the United Nations’ highest environmental honour, bestowed on the world’s greatest change agents – individuals and organizations meriting international recognition for their environmental achievements.

Watch the video on Prime Minister Modi’s Champion of the Earth Award.