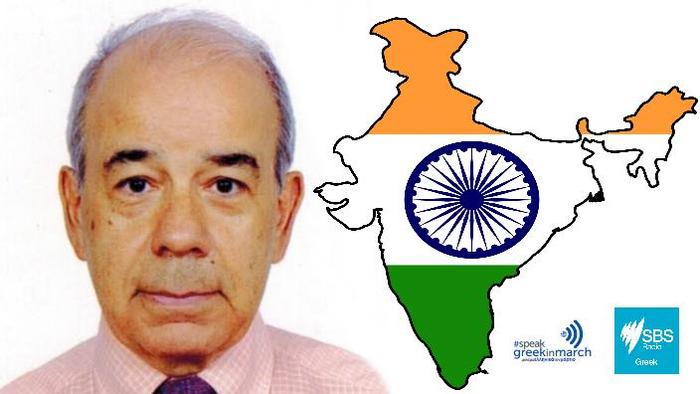 Ambassador of Greece in New Delhi Mr. Panos Kalogeropoulos gave an extensive interview to Mr. Stergios Kastelloriou about the Greek presence in India from the ancient times until today. The interview was broadcasted on March 28, 2017 by the Australian SBS channel within the series “We speak Greek in March.”

The Greek Ambassador spoke of the long historical and cultural links between the two countries from the times of Alexander the Great which were continued by his descendants for three centuries during the Indo-Greek kingdoms. He also referred to the Greek community of Bengal, the Greek-Orthodox church, the work of the leading Indologist Dimitrios Galanos the Athenian, and the Chair for Greek Studies at Jawaharlal Nehru University.

Speaking about the Greek Embassy in New Delhi, Mr. Kalogeropoulos said that it was founded in 1950, three years after the declaration  of the independence of India and that it was the first embassy of Greece in Asia because of the country’s large size and its particular importance in the Non-Aligned Movement. The current Greek presence, he said, is limited to a few Greeks who have mostly married Indians. In recent years there is also a constantly growing trade and economic activity between the two countries in the areas of food, construction, computers, tourism, and film industry. He characterized the relations between the two countries as excellent, emphasizing that the Indian Government traditionally supports all Greek national issues in the international organizations.