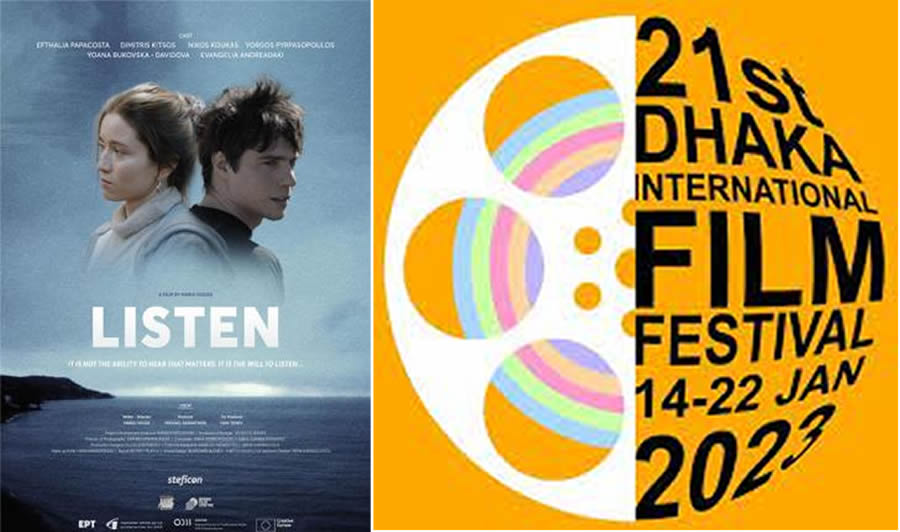 A Greek feature film, LISTEN (ΑΚΟΥΣΕ ΜΕ), by Maria Douza, participates in this year’s 21st edition of Dhaka International Film Festival, at the Women Filmmakers’ Section.  The film was made with the support of the Greek Film Center, Greek TV ERT, the Bulgarian Film Fund, EKOME, Creative Europe Media, North Aegean Region and the Municipality of Chios.

Written and directed by Maria Douza and produced by Michael Sarantinos (Steficon, Greece) and Ivan Tonev (ArsDigital, Bulgaria) LISTEN is a film about loneliness and our need to belong.

When deaf teenager Valmira (EFTHALIA PAPACOSTA) comes to live to her father’s (YIORGOS PYRPASSOPOULOS) island away from her special Athens school, she faces the possibility of prejudice and discrimination. Aris (DIMITRIS KITSOS), a Bulgarian immigrant boy, bullied at school, offers to become her friend and ally. But his status as “other” makes him unwanted company for Valmira.  Misjudging Aris, also because of her impairment, Valmira looks down at him and mixes up with his worst enemy, bullies’ leader Marios (NIKOS KOUKKAS), deeply hurting Aris and triggering conflict between the boys. When an unexpected turn of events leads Aris and Marios to reconciliation and mutual forgiveness, Valmira, at long last, is compelled to “listen” – not necessarily with her ears – to the truth of those around her as much as that of her own self.

LISTEN is a reflection on loneliness and isolation provoked by our inability, fear and resistance to reach out to other people. Valmira’s deafness serves as a metaphor both of our need to hear and our choice not to hear; our desire to be heard but also our refusal to listen, our egotistic preoccupation with the self.  But it is also a reflection on the power of goodness in a world where cynicism passes for wisdom and evil as the only essence of human nature. Our intention is to make a film that will show the humanity we all carry in ourselves, our potential to choose goodness over hatred, understanding over intolerance, empathy over selfishness.  We want to make a film that “will allow goodness its own speech” – as Tony Morrisson would say –  not to deny the existence of evil, but to counter it.

Set on a winter island – by definition a metaphor of isolation and loneliness – the film follows the troubles and tribulations of people – teenagers and adults – who struggle with communication, understanding and acceptance.  Every character in the film seems like an island cut off and floating in the wide sea.  In the end, what we want the audience to feel is that although deafness may be  a handicap of the ear, in a metaphorical way it can be a handicap of the soul.  And the only antidote to the deafness of the soul is empathy, the ability to become the other; to allow our natural tendency for compassion overwhelm us.

Maria Douza is a writer – director of fiction films and documentaries among which THE TREE & THE SWING (2013), which was shown to many festivals in India including Goa IFF and Kolkata IFF, THISSION CINEMA OF ATHENS (2017) and  LISTEN (2022) which will participate in the upcoming Dhaka International Film Festival in Bangladesh.  Her first feature, THE TREE & THE SWING (aka A PLACE CALLED HOME) was recently bought by NETFLIX. Maria is currently working on her next feature END POINT.

Michael Sarantinos, managing director of Steficon is a graduate from National Technical University of Athens (School of Computer Engineering), visiting Scholar at Stanford University, and PhD holder from Imperial College, London. In 1992 he founded ICON Ltd in the UK, a software company based in London with presence in 5 countries worldwide. In 2000 created Steficon, where he is the Managing Director.  He has worked as External Examiner for Multimedia for the British Ministry of Education (1996-2000), General Manager of Pegasus Interactive (2000-2002) and film production (2012-today). In 2012 he founded Steficon Films and has since produced a number of films and TV programs, including: THE TREE AND THE SWING (2014), by Maria Douza just bought by NETFLIX, THE SON OF SOFIA (2016) by Sofia Psykou (Best Narrative Feature Award at Tribeca Film Festival) and STILL RIVER (2018), by Angelos Frantzis (Best Director Award by the Hellenic Film Academy) and many more.  LISTEN (2022), by Maria Douza  is Michael’s 6th feature film.