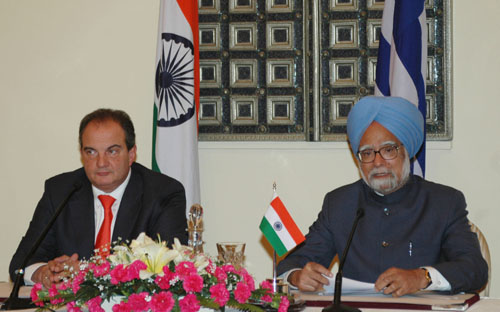 Prime Minister and I have just concluded a very useful and very productive round of discussions. As I underlined during our talks, India attaches high importance to relations with Greece both bilaterally and in the context of our strategic partnership with the European Union.

India and Greece are ancient civilizations with historical linkages. In the course of our long standing interaction we had learnt a great deal from each other. We are happy that this high-level visit comes within one year of the State visit of our President to Greece last year. This is a reflection of our shared desire to further intensify our bilateral engagement and cooperation. We would like to strengthen our contacts both at political, official, people-to-people and business levels.

Our multidimensional cooperation with Greece has been steadily developing. Today Prime Minister Karamanlis and I have agreed to raise our collaboration to even higher levels. Prospects of greater trade and economic cooperation are particularly promising. Our bilateral trade now stands at about six million Euros. We have agreed that the target set last year of one billion Euros by 2010 could be attained earlier through concerted efforts by our business communities.

I conveyed India’s readiness to purposefully engage with the European Union to conclude an India-EU broad based trade and investment agreement at the earliest. We have also agreed to revitalize our bilateral Joint Economic Committee in order to make it more result-oriented. Our enhanced economic engagement must move beyond our traditional trend to include areas such as infrastructure, shipping, power, agro-industries, automobiles and components, pharmaceuticals, renewable energy and information technology. We have identified tourism and culture as thrust areas which merit greater focus by both sides.

Prime Minister Karamanlis and I also exchanged views on several international issues. We agreed on the need for reform of the UN system to adapt it to contemporary global realities. I conveyed India’s gratitude to Greece’s consistent support to our candidature for a permanent seat in an expanded UN Security Council. We have agreed that the scourge of terrorism must be dealt with collectively and comprehensively. With a view to strengthening the international legal basis for global counter-terrorism effort, we share the view that the international community must accelerate work towards the early conclusions of the Comprehensive Convention on International Terrorism at the UN. We have also agreed to explore ways to address the issue of energy security including through cooperation in renewable energy.

I wish Prime Minister Karamanlis and members of his delegation a very pleasant and fruitful stay in India.

Prime Minister Dr. Kostas Karamanlis: It is a particular pleasure for me to visit India, a country of great history and great civilization which has immensely contributed to the world’s heritage and culture. I would like to warmly thank the Prime Minister of India, Manmohan Singh, for his invitation and for the warm welcome and hospitality he extended to me and the Greek delegation.

The relations between our two countries have always been friendly and cordial. Greece attaches particular importance to its cooperation with India, a country with a very significant impact on regional and world affairs and an emerging economic power with a very impressive record. We are very content that our common efforts are now leading to a steady progress in our relations. Last April, the State visit to Greece of the former President of India Abdul Kalam, greatly contributed among other things to the enhancement of our economic cooperation. My visit here today testifies to our will to further promote our bilateral relations.

We discussed with the Prime Minister the enhancement of our political cooperation and the framework of our commercial and economic cooperation. Bilateral economic relations between Greece and India have been developing at a rapid pace during the last years. The successful visits to India of the Greek Ministers; the Fifth Session of the Joint Economic Committee in New Delhi last November; the establishment of the India-Greece Business Council; are only a few of the key steps we have recently taken. We have a great potential in many sectors such as business ventures, trade, shipping and tourism. In this context we stressed the role of Greece as an economic hub in Southeastern Europe. We also examined our cultural and educational cooperation to which we attach great importance.

On the multilateral level, Greece and India have an excellent cooperation in the international organizations. Concerning the reform of the United Nations Security Council in particular, Greece strongly supports its enlargement in the context of the G4 initiative. Within the European Union, we work in order to determine ways and means to further upgrade the overall framework of the European Union-India relations. We also reviewed regional issues such as the current situation in Afghanistan and the recent developments in Pakistan.

Finally, I had the opportunity to inform the Prime Minister about the Cyprus problem and to thank him for the firm position India has maintained over the past years. We also discussed the issue of former Yugoslav Republic of Macedonia, the situation in Kosovo and its implications on security and stability in the Balkans.

Once more I would like to warmly thank the Prime Minister for his warm welcome and hospitality.

Question (Greek Media): Sir, strengthening of the economic and trade bonds between India and Greece is a mutual goal. In which ways can this goal be achieved?

Prime Minister Dr. Manmohan Singh: When President Abdul Kalam visited Greece, it was agreed between the two Governments that we should agree to raise the target for bilateral trade to one billion Euros by 2010. We have agreed that we should work together to accelerate the tempo of bilateral trade to exceed that level by the year 2010. There is enormous scope for expanding two-way flow of trade between our two countries. Tourism and services, information technology and biotechnology offer enormous opportunities for expanding two-way flow of trade and investment between our two countries.

Prime Minister Dr. Kostas Karamanlis: Let me just give you a few glimpses on the ways to achieve that. Through closer cooperation of our Chambers of Commerce and Industry, our Trade Promotion Organizations, our investment development organizations, through the organization of joint conferences, seminars, meetings to exchange information, to explore new and innovative cooperation opportunities, and, if I may also stress, through the completion of our relevant institutional framework of our economic cooperation, we are signing of the revised agreement on the avoidance of double taxation, and an agreement on air transport services.

Question (Indian Media): My question is addressed to both the Prime Ministers. Have NSG talks figured during your talks? If so, would Greece be supporting you? Prime Minister Karamanlis, Sir, what are your views on it? Would you support Indo-US Civil Nuclear Deal?

Prime Minister Dr. Kostas Karamanlis: As already said, I was very well briefed and we can consider the position of the Indian Government. What I may say at this point as a matter of principle is we have nothing against peaceful use of nuclear power for energy questions. We do not use it and we do not have any prospects to do it. But other countries do it in the European Union and all over the world. As long of course as India does it there is a clear stance as far as nonproliferation is concerned and of course in close cooperation with the International Atomic Energy Agency. So, overall I do not see why there should be a problem in close contact with your Government over this issue as well.

Question (Greek Media): Your Excellencies, I understand you have been discussing about several international and regional issues. Would you be so kind to comment a little bit further upon three specific topics – Afghanistan, Kosovo and Cyprus?

Prime Minister Dr. Kostas Karamanlis: Since two of the issues are in our part of the world, I will start. Let me start by expressing our appreciation first of all for India’s staunch position on the Cyprus issue. As you know, this is a problem of invasion and occupation. We strive for a settlement that will be based on the United Nations Resolutions and will be conforming to the International Law and the European Union values and principles. We fully support the 8th of July 2006 agreement and its immediate implementation. Unfortunately, the other side has not been as cooperative in implementing the agreed process. We hope that we will soon overcome the stalemate and that we will at the end of that all reach a solution that will enable the reunification of the island as a bi-zonal, bi-communal republic.

On Kosovo, unfortunately the negotiating efforts as (we) all know did not yield the desired result. The major challenge we are faced with now is safeguarding security, safeguarding stability in the broader region of Southeastern Europe. However, the situation in Kosovo will certainly have a great destabilizing impact on the region. Unilateral actions which could undermine a final settlement should be avoided and certainly we do support strongly the idea that the European Union should reaffirm the European perspective of the region. Finally in Afghanistan, as you know Greece is strongly committed to the improvement of the security situation and the overall reconstruction of the country. We attach great importance to the efforts to promote a sustainable economic development. Greece contributes substantially to the achievement of these goals through military and financial means.

Prime Minister Dr. Manmohan Singh: You have raised issues concerning Afghanistan, Cyprus and Kosovo. As far as Afghanistan is concerned, our position has been that every effort should be made to enable the Government and people of Afghanistan to get out of the trauma that visited them when the Taliban were in power. The reconstruction and development of Afghanistan has been a priority concern for our Government. We have over the years committed about 750 million dollars in support of the reconstruction and development programme in Afghanistan. Our assistance programme covers key areas such as roads, building, power systems, human resource development, education, health, parliament building. We are committed to do all that we can within our resources to help the Government and people of Afghanistan to improve the living standards of their people. We are fully in support of the efforts being made by President Karzai to bring stability and peace to Afghanistan.

As far as Cyprus is concerned, our position is well-known. We respect the unity and integrity of Cyprus and the Prime Minister knows our position is very close to the position that Greece has also adopted. We hope that peaceful reunification of Cyprus will proceed further. As far as Kosovo is concerned, I agree with the Prime Minister that unilateral action can be counter-productive. There are Security Council and United Nations Resolutions. We sincerely hope that a solution can be found by operationalising some of these concerns reflected in the United Nations Resolutions.

Question (Indian Media): My question is addressed to the Prime Minister of India. Sir, has your Government decided to confer the Bharat Ratna this year? Is the name of your predecessor also in your consideration?

Prime Minister Dr. Manmohan Singh: It is too early, there is still time to discuss and decide these issues.