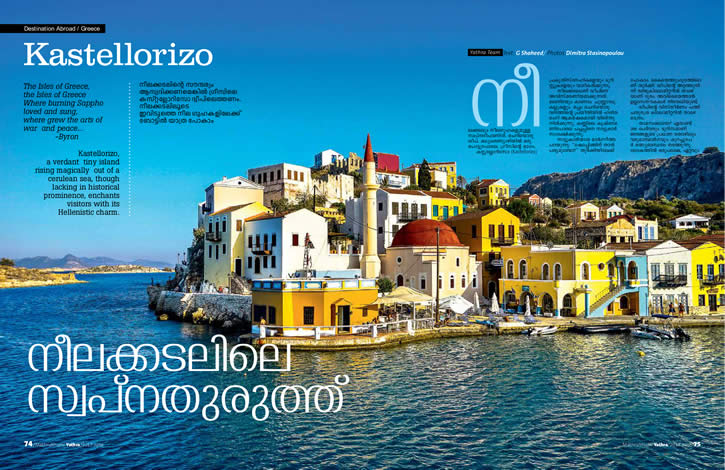 Some time ago, a journalist from the State of Kerala, India, Mr. G. Shaheed, asked famous photographer Dimitra Stasinopoulou some photos from Kastellorizo because he was very much impressed by the uniqueness of the island.

Dimitra Stasinopoulou’s photos were published together with a short accompanying article by G. Shaheed in  Mathrubhumi Yathra, a travel magazine with a high circulation. The article is written in Malayalam, the language of Kerala’s 35 million people.

Previously, the same magazine has published other articles about Greece such as “Greek Odyssey” (ഗ്രീക്ക് ഒഡീസ്സി) and “Embrace of Athens” (അഥീനയുടെ ആലിംഗനം), but its interest in this less-known island shows that the Indian travelers have begun to seek other destinations for their holidays, besides the well-known and large tourist resorts of Athens and the islands of Mykonos and Santorini.

See the article about Kastellorizo in Malayalam language HERE