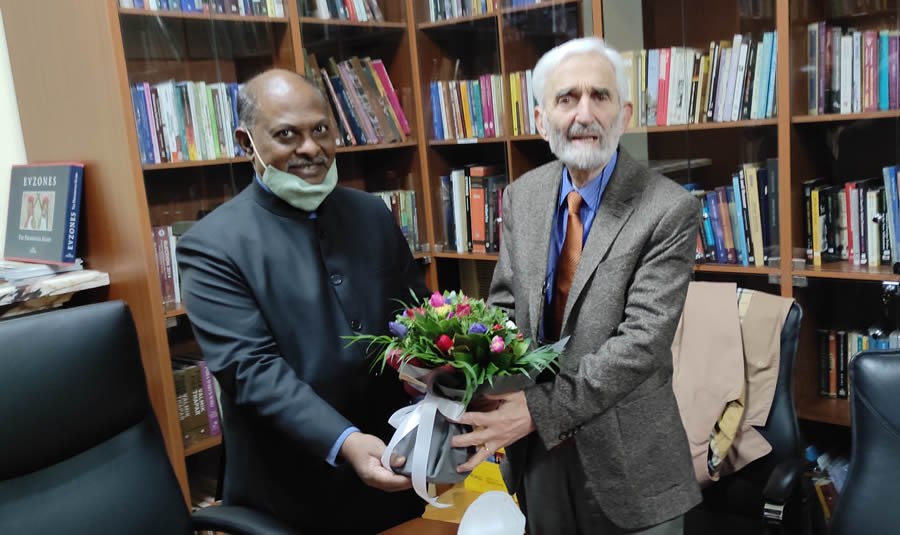 Prof. Nicholas Kazanas has been awarded India’s highly coveted Padma Shri Award for his lifelong contribution to Literature and Education  on the occasion of India’s Republic Day on January 26, 2021. Nicholas Kazanas thus became the second Greek to receive this award after the late Ambassador Dimitris Velissaropoulos who was awarded Padma Sri by the president of India K.R. Narayanan in 2002.

Ambassador of India Sri Amrit Lugun and Greek Indologists Dimitrios Vassiliadis, Pavlos Kavouras and Leda Santala congratulated Nikolas Kazanas at a small function that was organized at the Embassy of India in Athens on the occasion of the Republic Day.

Padma Awards – one of the highest civilian Awards of the Indian Republic, are conferred in three categories, namely, Padma Vibhushan, Padma Bhushan and Padma Shri. The Awards are conferred by the President of India at ceremonial functions which are held at Rashtrapati Bhawan usually around March/ April every year.

Nicholas Kazanas was born on the Greek island Chios in 1939. He studied English Literature at University College, Economics and Philosophy at the School of Economic Science and Sanskrit at the School of Oriental and African studies – all in London; also post-graduate at SOAS and at Deccan College in Pune. (India)

From 1997 he has turned towards the Vedic Tradition of India and its place in the wider Indo-European culture. This research comprises thorough examination of Indo-European cultures, comparing their philosophical ideas and values, their languages, mythological issues and religions. He has also translated the ten principal Upanishads from the original Sanskrit text into Greek and authored several books and articles on Vedic and other philosophical and religious issues.