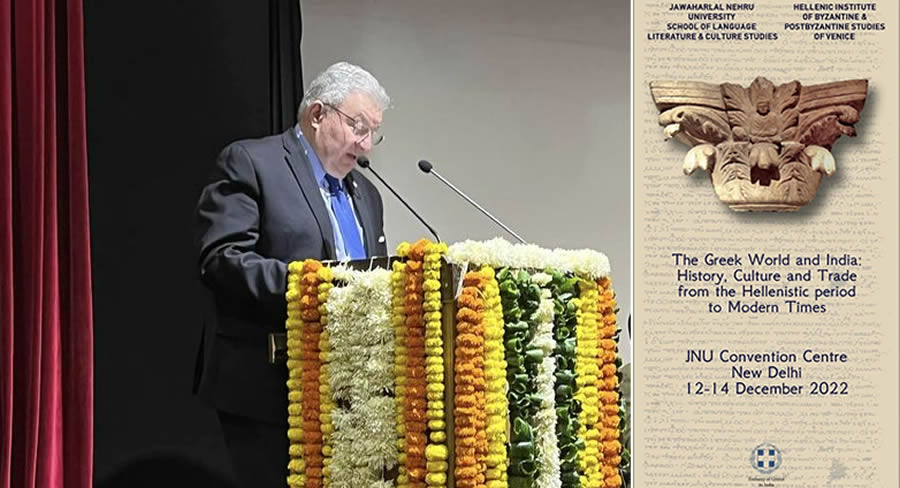 Keynote speech by the Secretary General for Greeks Abroad and Public Diplomacy of the Ministry of Foreign Affairs of Greece, Professor Ioannis Chrysoulakis at the opening of the International Conference “The Greek World and India: History, Culture and Trade from the Hellenistic period to Modern Times (4th c. BCE – 18th c. CE)” at Jawaharlal Nehru University, New Delhi

Your Excellency Minister of State,
Your Excellencies,
Honourable Dean of the Jawaharlal Nehru University,
Distinguished participants,

India belonged to the sphere of myth in the era before Alexander’s the Great campaigns in Asia, with few Greek authors referring to the country in the context of the mythical tales about Dionysus’ or Hercules campaigns, as their ultimate destination. Various kinds of information, to a certain degree mythical, are preserved in the first Greek testimonies about India from Scylax of Caryanda, Hecataeus of Miletus, Herodotus, and Ctesias of Cnidus.

More important information can be found in the authors describing Alexander’s campaigns (Arrian, Curtius, Diodorus Siculus, Plutarch, etc.), notwithstanding that most of them compiled their works three or four centuries after his death. Alexander was accompanied by a group of philosophers, geographers, explorers etc. besides historians. It was the first time that an organized Greek army had set foot on Indian soil, however, as it is known, Alexander did not go further than the Hindus River and its tributaries and descended towards the sea (the Indian Ocean). He refrained from crossing Hyphasis and enter the heart of India, where the organized state around the Ganges River lay.

In the era after Alexander the Great, the new Indian Maurya dynasty deprived the Seleucids of their Indian territories. The Indian kings, however, Chandragupta Maurya (Sandracottus), Ashoka etc. came into contact with the Hellenistic states of the West, which dispatched embassies to the capital of the Indian Empire, Palimbothra (Pataliputra). The first ambassador of Seleucus I was the known Megasthenes, who wrote about the Indian sages, the social and state organization of the Indians, their customs and traditions, the geography of India, etc. Despite the existence of mythical elements in his descriptions, the information conveyed by Megasthenes is reliable and invaluable. Another two ambassadors sent to Mauryan India and known to have written on it, were Deimachus (sent by Antiochus I) and Dionysius (sent by Ptolemy II Philadelphus), both of whom were heavily criticized, particularly Deimachus, due to the myths they included in their descriptions.

A new era in the contacts between the Greek and Indian worlds began with the Hellenistic states of Bactria and India and their dozens of kings, known to us through their minted coins. The first of these states was the result of a secession from the Seleucid state, a little after 250 BCE. It comprised Bactria and its surrounding regions and, after 200 BCE, it expanded towards India, reaching as far as Ganges River and, southwards, stretching beyond the point of the Hindus estuary. Menander, a supporter of Buddhism, is the most prominent figure amongst the kings of this state (circa 155-135 BCE) and is known through the Buddhist text Milinda Panha (The Questions of Menander), where he is portrayed as the king of India, having Sagala as the capital of his state and engaging into a religious dialogue with the Buddhist monk Nagasena. From that period onwards, the decline of the Greek kingdoms of India was irreversible until the early Christian period, except for a few short-lived flares. Despite the decline, Greek populations continued to live in the areas where Alexander or his successors had founded cities. Of these, the most important were the areas bordering the NW edges of India comprising the southern slopes of Hindukush, i.e., modern N. Pakistan, NW India and Central-East Afghanistan. A Yona-Yavana state (as was the name for the Greeks) had managed to survive well into the first Christian centuries, attested also by the name Fromo/Fulin (Rome) in Iranian and Chinese sources. It is in this period that the great epic of King Gesar (King Caesar) proliferates across a large part of Central Asia. Although the epic has Tibetan origins, the name of the main hero derives from the title of the Emperor in Constantinople (Fromo Kesaro=Roman Caesar) and must be related with the Fromo/Fulin (Rome) princedom of Hindukush.

India proper to the south was accessible to Greeks by sea already from the 1st and 2nd c. CE. Greek and Indian sources (the most important being the Periplus of the Erythraean Sea of the 1st c. CE) speak of Greek ships arriving at the Indian ports in the subcontinent’s west coast. From Barbarikon, at Hindus’ estuary, to Muziris, in India’s southernmost part. The east coast was equally accessible. Southern India was the center of trade in the 1st and 2nd c. CE and numerous Greeks lived there, operating as merchants or mercenaries-guardians of local rulers, while hundreds of Roman coins are continuously being brought to surface.

Influence from the Greek presence in India is attested in architecture, urban-planning, minting (bilingual legends of the coins minted by the Greek kings), astronomy etc. while the Graeco-Buddhist artistic style of Gandara was developed in sculpture and was present until the 8th c. CE. Important information on India is provided by Strabo, while Claudius Ptolemy (2nd c. CE) without doubt had advanced geographical knowledge about India and East Asia.

During the Middle Ages news about India and, generally, the East, becomes much scanter. Despite that, the islands to the west of India, Maldives, and Laccadives, were known to the Greeks, identified respectively with Manioles islands and Divous island. The Divous island was a stop in the journey towards India and the place of origin of Theophilos the Indian, who was carried as a prisoner in the west during the reign of Emperor Constantine the Great. This suggests that even in the 4th c. CE the Byzantines were prevalent at least over a part of the Indian Ocean, securing there bases for their fleets. The Byzantine author conveying more information on India is Cosmas Indicopleustes, reporting on the numerous Indian ports, from Sindu at Hindus’ estuary (the ancient Barbarikon) to the ports of southern Indian and the island of Sri Lanka (called Taprobane), which had evolved into a hub of international maritime routes substituting for southern India. South and East India, however, continued to be the destination of merchants from the west, who took the riverine route along Ganges and reached China through Assam, avoiding the old maritime route that circumnavigated SE Asia. This is the route through which the greatest part of silk was directed to the western markets, except for those quantities that made it to Europe through the overland steppe route. Of the ports of western India during the Middle Ages, the most known to Europeans, due to the existence there of markets for the export of pepper, were: Barygaza (Bharuch), Kaliana, Male (Malabar), and Muziris. The Indian ports and Sri Lanka (Ceylon) were destinations for Byzantine merchants, as well, who travelled by Ethiopian ships, while the Byzantine golden coin was extensively circulating in the markets of the island.

The Greek language, at the same time, was spoken in Dioscouridoi island (modern Socotra) in the Indian Ocean and functioned as a lingua franca in the Indian ports as late as the 6th c. CE. Christianity, in the form of Nestorianism, and the Greek language were active positive factors in trade exchanges from the Red Sea (where monophysitism was prevalent) to Ceylon.

In the period after the 7th c. CE, information on India becomes scanter. Various authors indirectly mention India, by resorting to the texts of previous authorities and while referring to Seres and Sines. In the early modern period and prior to the establishment of the Greek state, Greek merchants from the Ottoman Empire roamed across Central Asia, following the routes of commerce that connected the rest of the Empires of Eurasia with India and China. The Greek Orthodox Church was particularly interested in these trade routes and sought to make them known to the community of Greek Ottoman merchants, who operated in international overland trade as agents of the Ottoman or Russian Empires. The Greek Orthodox merchant networks were amongst the main means by which the Church acquired its funding and the Church’s prominent figures, such as Dositheus II and Chrysanthos Notaras (both of whom were Patriarchs of Jerusalem) wanted to communicate whatever knowledge there was on the contemporary trade routes. At the end of the 17th c. they both turned to Nikolaos Spatharis, a member of the Muscovite Foreign Ministry, who provided them with descriptions of trade routes and major trade stations in Central Asia, Persia and India. Another Greek-Ottoman merchant, in the first half of the 18th c., who was based in Moscow and travelled in Central Asia, attempting to enter India unsuccessfully due to Kazakh raids taking place in norther Afghanistan at the time, was Vasileios Vatatzis, whose map of Central Asia (published in London in 1732) includes the NW fringes of the Indian world.

With that, I conclude this brief overview of India’s position in the Greek view of the world across History. A mythical land for the archaic Greeks, a homeland for the Greeks after Alexander the Great and a land of immense riches for the Greeks during the Middle Ages, we may conclude that India has been a steady point of reference in the world for Hellenism, present in its every historical phase. Utilizing the opportunity of addressing the august audience of this conference, allow me to point out that over the recent years Greek-Indian relations have been traditionally at a very good level, based on a number of Agreements, that cover a wide range of fields, with the view to promote bilateral cooperation. The Greek-Indian cultural and educational relations, in particular, have been based on a Cultural Agreement since 1961, implemented via consecutive Executive Programs, the latest of which covers the years 2022-2026. Within the scope of the current Executive Program priority is given to encouraging numerous events of mutual interest, such as film festivals, book presentations, music events, as well as theatrical performances and exhibitions. Last but not least, I cannot but underline that our countries, India and Greece cooperate closely within the framework of UNESCO and no doubt we can continue to explore areas of common interest, in order to further expand and deepen our relation. Thank you for your attention and my sincere thanks to the JN University for hosting this fruitful conferenc