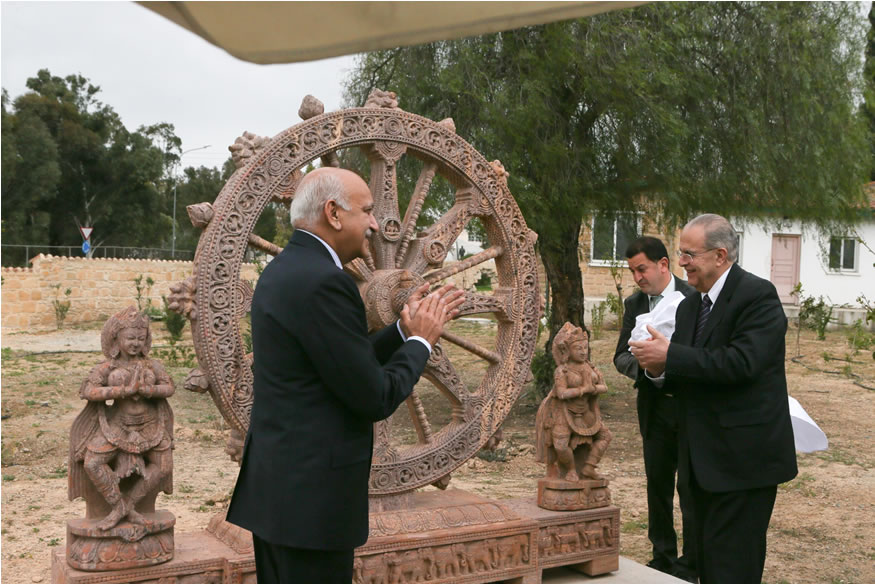 The sculpture, which is exhibited at the outdoor museum of the Protocol Division of the Ministry of Foreign Affairs, symbolizes the power, strength and valor to move forward in life with responsibilities. The wheels of the chariot are symbolic to the “Wheels of Life”. They portray the cycle of creation, preservation and achievement of realization. According to a legend, 1200 sculptors worked non-stop for 12 years to build the original Konark Wheel. It is now world heritage site. The Temple of Sun is known for its undisputable beauty, the creativity, its engravings and its architectural magnificence.

Speaking at the unveiling ceremony, Minister Kasoulides said that the Konark Wheel is “a standout amongst the most stunning landmarks of religious importance in India, a masterpiece of architecture, proudly standing in the form of sun temple at Konark, designed in the shape of a colossal chariot carrying the sun god, Surya, across heavens”.

He underlined that the Konark of Wheel is also an indisputable proof of the cultural richness and diversity of India, “which your country has bequeathed to world civilization. Above all, the sculpture is symbolic of Hindu art, and a small indication of its great achievements. Little wonder that the Wheel has become a national symbol of India”.

Referring to the sculpture’s unveiling, Mr Kasoulides said that this constitutes a further solid proof of the close friendship between Cyprus and India. “We are very grateful for your country’s gesture. It means so much to us, in terms of our two countries genuine relations, which have had a lasting and indelible impact. Perhaps there is also a message to be conveyed by the Konark Wheel, not just its symbolism in life, beyond the apparent meaning it conveys: That true friendship is irreplaceable, as it is indispensable and indestructible”, he highlighted.

On his part, the Indian Minister of State, referring to the symbolism of the Wheel, pointed out, inter alia, that once it finds its directions, it leads to the horizons that someone dreams of. “This gift of the Government and people of India is a concrete evidence of the close, cordial and cooperative relations. I am sure it will further contribute in strengthening our bilateral relations and take these relations into a forgotten area of our partnership, which is culture”, Dr Akbar stressed.