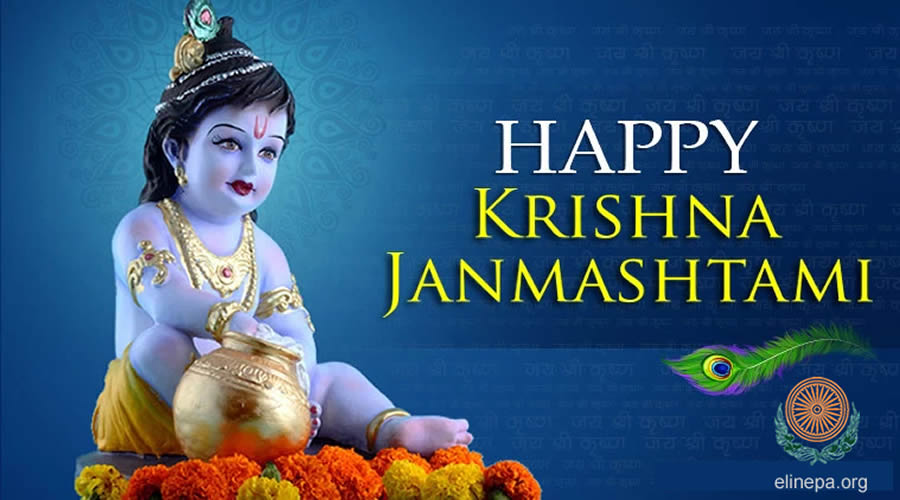 Krishna Janmashtami, popularly known as Janmashtami and Gokulashtami, is one of the widely celebrated annual Hindu festivals. The festival marks the birth of Lord Krishna who is believed to be the eighth incarnation (avatar)  of Lord Vishnu. It is observed on the 8th day (ashtami) of the dark fortnight (Krishna Paksha) in the month of Bhadrapad of the lunar Hindu Calendar, which overlaps with August and September of the Gregorian calendar.

All over India, this day is celebrated with great devotion and enthusiasm, particularly to the Vaishnava tradition. Hindu devotees keep fast for the whole day.  They decorate temples and homes where they sing devotional songs and perform pujas, arti, and plays and dance performances based on the folklore of Krishna’s birth. On this auspicious day, the idol of Krishna is also placed in a cradle and bathed with panchamrit-made of ghee, milk, Ganga water (gangajal), honey, and tulsi leaves which is then distributed as an offering (prasad) among devotees.

The legend of Lord Krishna’s Birth

On the day Devaki was married to Vasudeva, her brother Kamsa, the evil ruler of Mathura (in northern India) heard a voice from the sky, prophesying that Devaki’s son would kill him. Frightened, Kamsa sent his sister and her husband in prison, where he killed one by one all the seven infants who were born to the couple.

At that distressing time, Lord Vishnu appeared before them and said he would be born as their eighth son, who will rescue them from Kamsa’s cruelty. When the divine child was born, Vasudeva found himself magically freed from prison, and he ran away to save his son. Vishnu removed all obstacles like snakes and floods from his path. Finally, he handed the infant over to foster parents — Yashoda and Nand – with whom Krishna was raised as a cowherd. When he matured, Lord Krishna returned to Mathura, slew Kamsa and restored his father to power,