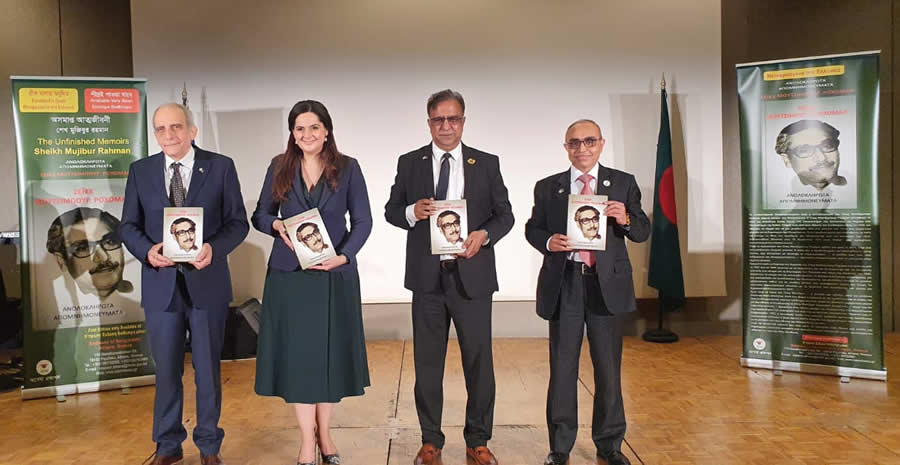 The Greek translation of the “Unfinished Memoirs” of Sheikh Mujibur Rahman was launched as part of a special event organized on March 16, 2022 in Athens on the occasion of the celebration of 50 years of Greek-Bangladeshi diplomatic relations.

Before referring to the Greek translation of the book we present today on the occasion of the completion of 50 years of Greek-Bangladeshi diplomatic relations, I would like to express my gratitude to the former Ambassador of Bangladesh in Athens, Mr. Jashim Uddin, who entrusted me with the translation of the book. as well as to the current Ambassador Mr. Ashud Ahmed for the opportunity he gave me to attend the World Peace Conference hosted by the Bangladeshi Foreign Ministry in Dhaka last December.

There, I had the opportunity to visit the residence where Sheikh Mujibur Rahman was assassinated, the University of Dhaka, the Monument to the Martyrs who were killed in the Language Movement, the National Museum and many other sites mentioned in the book. Moreover, I had the opportunity to see for myself the great love that the people of Bangladesh have for the Father of their Nation, as well as the realization of the fundamental principles for which he fought during his life, i.e. National Independence, Democracy, Secularism and Economic Prosperity, principles that his daughter and current Prime Minister of Bangladesh, Sheikh Hasina, continues to apply with dignity.

Regarding the book, it is a part of Sheikh Mujibur Rahman’s diary, which he wrote during his time in prison as a political prisoner from 1967 to 1969. The notes date back to his childhood and the origin of his family making an extensive reference to the glorious past of Bengal, as well as to the movement for Independence from the British yoke, which was watched with particular admiration by the then young author. He goes on recalling his days as a student at Calcutta University and as an activist for the founding of independent Pakistan, and vividly describes the bloody clashes between Muslims and Hindus that followed the partition and shocked the Bengal and the Indian Peninsula. He also mentions in great detail the struggle he waged with his political mentor Huseyn Shaheed Suhrawardy to stop the violence and the flow of refugees, as well as his meetings with Mahatma Gandhi and Muhammad Ali Jinnah and the admiration he had for them. He describes with great brilliance his travels to the Islamic monuments of India and Pakistan, as well as the very positive impressions he derived from his trip to China.

His memoirs also extensively cover his political struggle and the persecution and imprisonment suffered by himself and his people from the regime of West Pakistan during their claims for the economic, political and cultural autonomy of the then East Pakistan, which in 1971 eventually gained its independence and was named Bangladesh.

This is the autobiography of a man who was to become the protagonist of Bangladesh’s independence. His direct, simple but also full of faith and power writing, conveys to us the great uncertainties as well as the great hopes that prevailed in his time, while we are impressed by the fact that despite the hardships and persecutions he suffered, he is not possessed by hatred or desire to take revenge on anyone.

The book is called “Unfinished Memoirs” because it contains only a part of his surviving notebooks. The last notebook ends with the events that marked the struggle for democratic rights in 1955. Miraculously, the assassins of Sheikh Mujibur Rahman did not pay attention to his notebooks and did not destroy them. His daughter, Hasina Sheikh, will find them many years later, in 2004, and their discovery will be a historic event. The pages of the notebooks were fragile and discolored and were carefully transcribed and later translated from Bengali into English. Today the book has been translated into most languages ​​of the world including Urdu in Pakistan and Hindi in India.

I am particularly happy to have had an honor of translating Sheikh Mujibur’s “Unfinished Memoirs” into the Greek language. The translation was made from the English version. However, we paid special attention to rendering the closest to the original Bengali pronunciation. For example, we wrote the title Bagabadhu, with three omicrons -“o”- and not with three alpha – “a”- used in the English translation, as the pronunciation of the short “a” alpha in Bengali is closer to “o” – Greekomicron.

The book highlights the superior spiritual values of Seikh Mujibur Rahman and records the historical events as he lived them, making it necessary for any scholar of Bangladeshi history and South Asian studies. I hope and wish that the Greek translation of the Bagabadhu’s Memoirs will give the opportunity to Greek-speaking readers to get to know better the culture of Bangladesh and thus contribute to the further development of Greek-Bangladeshi friendly relations.

Thanking you for your kind attention.

Cover photo:
Launch of the Greek translation of the Unfinished Memoirs of Sheikh Mujibur Rahman. In the photo from the left: The Indologist Professor Dimitrios Vassiliadis, the General Secretary of Contemporary Culture Mrs. Eleni Dundoulaki, the Minister of Culture of Bangladesh Mr. M.K. Khalid and the Ambassador of Bangladesh in Athens Mr. Ashud Ahmed.