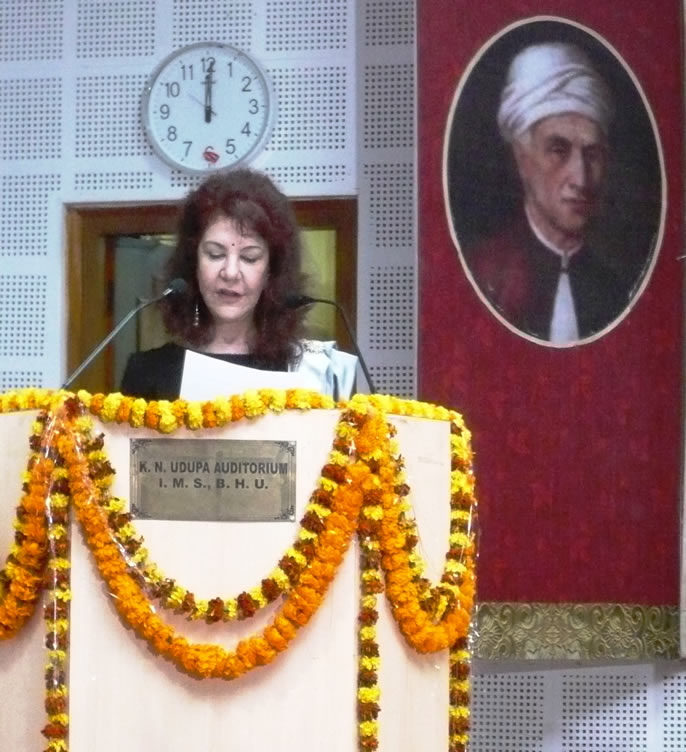 The Indira Gandhi National Centre for the Arts (IGNCA) organized an international conference dedicated to the cultural relationship of Greece and India from the 18th century to this day. The conference, titled “Demetrios Galanos and his legacy: Hellenic-Indian studies 1790-2018″, took place from February 3rd to 10th in Delhi and Varanasi and attended by several scholars, musicians and artists from India, Greece and other countries, who contributed to the development of Greek-Indian cultural relations.

Among the invited speakers was Leda Shantala, a Greek researcher, choreographer, dancer and teacher of classical Indian dance Bharata Natyam, founder and director of the Shantom House of Culture in Athens. Leda delivered her speech titled, “Greek-Indian dance creation: sacred dance in ancient Greece and India” at IGNCA and Banaras Hindu University with video excerpts from performances of the “Leda Shantala Dance Theatre” which was extremely well-received by the audience. The video excerpts were chosen for their relevance to the parallels between ancient Greek art and classical Indian art.

Dr Dimitrios Vassiliadis, in his own speech on Sanskrit in Greece, spoke also of the Dance Theatre’s productions which were dedicated to Sanscrit plays such as Kalidasa’s Shakuntala and Kumara Sambghava, poems like Jaya Deva’s Gita Govinda, works like the Yoga Vashistha etc.

The lecture was a comparative presentation of ancient Greek dance, “Musike” (the art of the Muses) and Indian classical dance “Bharata Natyam”. Leda Shantala is honored with the statue of the goddess of knowledge and arts, Saraswati, by Prof. Bharat Gupt

Ancient Greeks and ancient Indians enjoyed and revered dance in very similar ways. For both, dance was of spiritual essence, a gift of the gods and a means of communicating with them. In both traditions, dance, music, theatre and mime were closely intertwined: ancient Greek dancers performed some gestures akin to the Indian mudras and there are written descriptions of their use of face expressions as well. For the ancient Greeks, as well as the ancient Indians, art possessed great healing capacities of purification, for both the artist and the public. It was considered as a spiritual path for self knowledge and realization.

The above comparative approach has been the basis of inspiration for many of the “Leda Shantala Dance Theatre” productions (excerpts of which will be projected), which highlight in an artistic manner this inner spiritual relationship of ancient Indian and Greek art forms. Leda Shantala graduated in French Literature from the Sorbonne University in Paris. In India, for 4 years, she studied classical Indian dance Bharata Natyam (graduating from the Indian Dance Academy «Bharata Kalanjali» and the «Abhinaya Sudha» in Chennai).

She studied yoga with T.K.V. Desikatchar, B.K.S. Iyengar and others, graduating from Kaivalya Dhama, Lonavla. Her meditation guru is Chandra Swami Udasin whom she still visits regularly.

In 1985, she founded the Mandiram Centre, an institution for research in ancient Greek and Indian art, where she taught yoga and bharata natyam.

Since 1987 her company Leda Shantala Dance Theatre, has presented numerous productions combining the art of Bharata Natyam and the ancient Greek art of the Muses with theatre and contemporary dance idioms.

In 2003, she created the Shantom House of Arts & Culture, hosting courses, lectures, seminars and performances. Shantom hosts the only professional Bharata Natyam Academy in Greece.

Leda Shantala’s theoretical research has been focused on the ancient relationship of “Musike” (the Greek art form of the Muses) with Bharata Natyam and on the ancient roots of dance movement therapy in India and Greece.

She has authored a book on Bharata Natyam and is now working on the Patanjali Yoga Sutras.

Video of  Leda Shantala’s full lecture made by Ravi Sharma – whom we warmly thank: