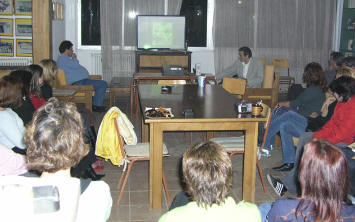 “The Castle”, the Cultural Association of Limenaria in Thassos, organised on the 3rd November 2004 the first-ever in Greece lecture of the Indologist and chairman of ELINEPA, Dr. Demetrios Vassiliades, on the subject “Mahatma Gandhi: the Father of Modern India.” The well-organised cultural evening gathered schoolteachers, scholars as well as students and residents of the island. The audience for the lecture came from as far as Kavala on the mainland. The whole event was covered with appreciative comments in the local press.

During the lecture there was a screening of a documentary on Mahatma Gandhi (produced by the Publications Department of the Government of India), which included rare original photographs and cinematographic extracts from the life and work of the great national leader of modern India. At the same time, extracts were read from “Mahatma Gandhi: A Holy Soul”, a biography written by Helen Kazantzaki (wife of Nikos Kazantzakis) in Greek. A discussion followed, which extended to several other topics regarding India.

Speaking about Mahatma Gandhi (1869-1948), Dr. Vassiliades said that his spirituality and his moral fabric influenced his political action and that he attracted international recognition for his high morals and values with which he defended the interests of India during its struggle for freedom from British rule. Gandhi advocated peaceful resistance and non-collaboration with the British rulers as well as non-violence, while, at the same time, he tried to unite the Indian population with the concept of religious tolerance. The Indian people gave him the Sanskrit title “Mahatma”, a term related to “saint”:  (Maha = Great + Atma = Soul).

The next day, Dr. Vassiliades visited the Lyceum of Limenaria where he gave a lecture to the senior students about Greek and Indian philosophy and had long discussions with the teachers, who expressed interest in twinning their school with an equivalent school in India. Later, the chairman of ELINEPA visited the famous sculptor and painter Kostas Lovoulos in his studio and discussed with him topics relating to the cultural situation of the island and its international standing.

Up: Dr. Vassiliades projecting the documentary on Mahatma Gandhi in the hall Kyparissos Kyparissiou, Limenaria, Thassos.