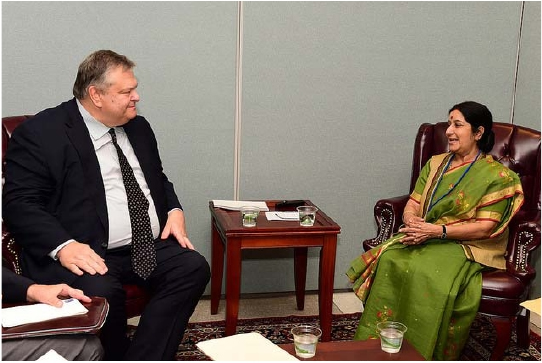 A main item of discussion was India’s positive stance on Greece in the International Monetary Fund Board of Directors and the relevant procedures, for which Mr. Venizelos thanked Ms. Swaraj, also referring to the substantial discussion he had, as Finance Minister, with his Indian counterpart, Pranab Mukherjee, on the margins of the IMF Meeting in 2011.

Mr. Venizelos and Ms. Swaraj also discussed the strengthening of bilateral cooperation on the political level, the convening of the 7th Greek-Indian Joint Interministerial Committee as soon as possible – within 2015 – and the assistance Greece can provide, as an EU member state, in promoting EU-India relations through a Free Trade Agreement.

Mr. Venizelos and Ms. Swaraj then reiterated that Greece looks positively on a future amendment to the UN Charter that would make India, due to its size and international sway, a permanent member of the UN Security Council.

Ms. Swaraj asked Mr. Venizelos for additional information on the economic situation in Europe and expressed her appreciation of the Greek economy’s progress in recent years, as well as her wishes for its further improvement. Ms. Swaraj also responded positively to Mr. Venizelos’ mention of the need to strengthen exports of Greek agricultural products to India and remove any barriers Greek agricultural exporters are coming up against in the Indian market.

Special reference was made to the importance of the cultural cooperation between the two countries. The fact that the two countries represent two of the most ancient civilizations in the world provides a good foundation for the further strengthening of bilateral relations in other sectors, beyond culture.