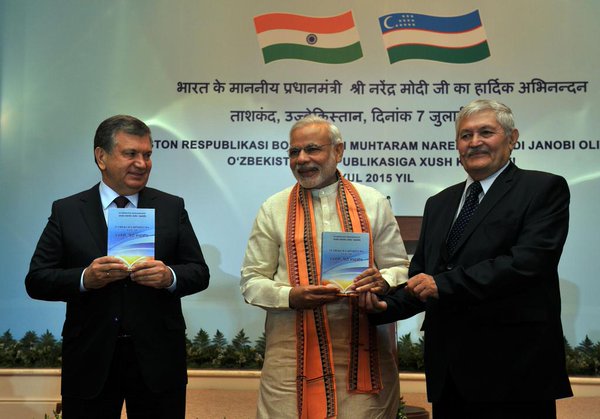 Prime Minister Narendra Modi interacted with Indologists, students of Hindi and Indian community members in Tashkent, during his official visit to Uzbekistan on July 7,  2015 and presented the first ever Uzbek-Hindi dictionary along with Uzbekistan Prime Minister and Indologist Rakhmatov.

While speaking to the audience, PM Modi referred to the link that exists between economy and language by saying “Those (countries) whose economy is strong, wings of their language grow faster as people want to learn their language.” He also expressed the view that the learning of Hindi language is going to increase as India is on the course of economic advancement.

Talking about the importance of education, Narendra Modi said, “I believe that for personality development, language plays a huge role. A common language binds strangers who meet in a foreign land. Language is a window to the immense amount of knowledge that it offers.

In his opinion, ‘people-to-people contact’ is the basis for building up ties between the countries where the language and culture are considered truly vital. The feel and the vibe of an era can be felt through its language. Language is the soul of an epoch. Languages have big heart. “Water takes the form of whatever it is mixed with, language is like that too. It imbibes from ages, places, traditions. If we do a DNA test of a language, its heart will be found to be very big because it absorbs everyone and everything. Its inclusive…. But two things have the same language all over the world –  laughing and crying.”

Indian movies, language & music are very popular in Uzbekistan. In 2012, Uzbek radio completed 50 years of Hindi broadcasting and continues to have a very large audience.