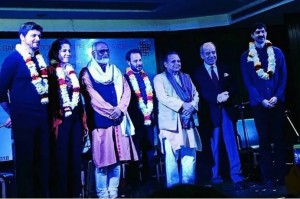 My participation at the Outbound Travel Mart (OTM) Exhibition in Mumbai came as a result of a proposal to me by my Hindi teacher Dr Dimitrios Vassiliadis, which I accepted with great pleasure. Although I have been travelling to India frequently, I wasn’t aware that the OTM is one of the biggest exhibitions worldwide and the biggest tourism and travel exhibition in Asia. My position in this exhibition was at Kavala stand, one of the seven participants at the National Greek Tourism Organisation (NGTO) kiosk. Mr Vassiliadis considered that I would be the right person to promote Kavala and the tourism to Greece, as I have lived several years in India and I understand very well the mentality and the needs of Indian people. Moreover, I have always wanted to connect these two countries through their culture. Therefore, I readily accepted the invitation to take part in this exhibition.

Before my trip to India I met with Mrs Anastasia Iosifidou, Board President of the Municipality of Kavala Public Benefit Organisation “Dimofeleia” in order to prepare for our exhibition presentation, as she would be attending there too.

OTM took place over three days from 18th to 20th January 2018. The first day, I arrived at the exhibition accompanied by my Indian friend, Mr Ujjawal Gauraha. There we met Mrs Katerina Meimaroglou (responsible for the NGTO kiosk) and Mr Michael Michailidi, Head of Market research department of the ministry of tourism, who welcomed us warmly. Then arrived Mrs Iosifidou with all the promotional material, leaflets, magnets, cards, pendrives (with videos about Kavala and detailed tourism packages).

From the first moment it became apparent that we would need someone who would be able to communicate directly with Indian people and who would impress them by speaking their own language. This became apparent to my friend too and so, after getting permission, he was integrated in our team, so that we would achieve better outcomes. The team was now complete and we were confident that we had the best possible representation. We need to acknowledge Mrs Iosifidou’s  invaluable contribution, as she was the motivating force for Kavala’s participation in OTM.

We are proud not only for having exchanged cards with about 300 travel agents, but also for having presented Kavala, with an insider knowledge of Indian mentality, thanks to the significant contribution of the Indian member of our team. We explained to the Indian Travel Agents and interested travellers that “anything they might have in mind as the definition of beauty” they can find it in Kavala. The concept of beauty is of course subjective and different for each one of us. Some might like the forest, some other might like the blue sea or the blue sky. Kavala, as a municipality and as county, offers natural beauty ranging from mountains, sea, rivers, architecture, antiquities and a combination of different activities relevant to all these. It also offers mud baths, good quality food, entertainment, arts and culture. Undoubtedly, it’s a unique opportunity for Indian people to explore Kavala. Having such a variety of beauty, food and activities, it is an ideal destination for short or longer holidays.

Moreover, there is the possibility of making a combination of holidays in Greece and other neighbouring countries, like Turkey and Bulgaria. We suggested to Indian people this combination too, as this is a great opportunity to use common tourist packages with these neighbouring countries that already enjoy Indian tourists in their countries. This would promote Kavala in an even better way.

Most Indian Travel Agents are aware only of Santorini and Mykonos. We informed them that these destinations are indeed very good, however, during peak holiday periods it is more difficult to find rooms due to the big volume of tourists, plus the quality of holidays might not be up to their expected standards. We are aware that Indian people seek tranquility, thus it would be advisable that they explore less well known places, like Kavala. Moreover, there are some Indian people that have already visited Mykonos and Santorini and who like Greece, so it’s a great opportunity to promote Kavala as a new tourist Greek destination. Kavala has easy access, as Thessaloniki is only 1hr and half away by car and there are frequent daily flights from Athens.

As for newly married couples, Kavala would be an ideal honeymoon destination. Given that working couples might only have short holidays, they need to stay at a place that offers them the maximum variety of tourist provision in a short space of time. Kavala certainly offers this possibility. If the couple would like to try out the island experience, they can go for an excursion at the island of Thassos that is in close proximity or travel a bit further away to the island of Samothrace. They can also fill their days enjoying beautiful calm moments around Kavala, fulfilling a range of different quests: food, shopping, activities, beaches and romantic walks, avoiding other busy destinations.

Our team signposted the exhibition visitors to other travel agents of the NGTO kiosk, while recommending to include Kavala in their travel packages. We also indicated to the visitors ways of adapting their tourist packages so that they cover a big part of Greece if they have longer holidays, thus combining culture and hospitality, for which Greeks are famous.

Being aware of the love Indian people have for Bollywood movies, Mr Michailidis did an excellent presentation, showcasing Indian songs that were shot in Greece, therefore, increasing the interest and enthusiasm of the Travel Agents. The promotion of tourist packages in places where Bollywood movies have been filmed is easier, as Indian people adore cinema and are very keen on visiting places where their favourite Indian stars were filmed and places that they saw on the big screen.

Following guidance with suggestions for all different seasons around the year, the Indian Travel Agents appeared more convinced to include Greece and Kavala in the travel packages. Their response has been very enthusiastic.

OTM has now been completed and we feel happy to have given it our best! NGTO kiosk was awarded  for its excellent presentation and this was only the cherry on the pie. We are coming back from India feeling certain for the positive outcomes and we look forward to the seeing the increase of Indian tourists in Greece all year long.

*Veronica Iliopoulou, is an actress and singer since 1994. She collaborated with important directors at the National Theatre of Greece and at independent theatre companies. She shares her time between India and Greece for the last 16 years. She always looked out for connections between the two countries. In Mumbai, Veronica collaborated with Anup Jalota Singning bjajans, as well as another company that sang fusion Greek music. Veronica studied Hindi with Dr Vassiliadis at the department of foreign languages of Athens University. Veronica participated as casting assistant with the song: “Swag Se Swagat” of Bollywood’s best production movie “Tiger Zinda Hai”, that was shot in Naxos Island in October 2017.