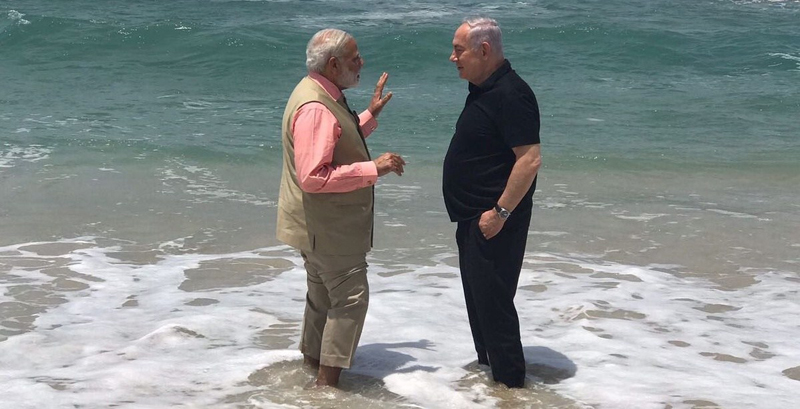 Israeli Prime Minister Benjamin Netanyahu used some yoga know-how during his recent meetings with Indian counterpart Narendra Modi in Jerusalem and New Delhi, as he sought to drive home his message of the two nations’ shared values and warm relations.

Netanyahu said during his official visit to India on January 15, 2018 that he was willing to participate in a “yoga class” with his “friend  Narendra”.  “My friend Narendra…any time you want to do yoga a class with me…it is a big stretch but I will be there. Trust me,” Netanyahu remarked.

This is a continuation of his repeated statements in Jerusalem when Naredra Modi visited Israel last July, the first Indian prime minister to do so. During the two leader’s joint statements in Jerusalem, Netanyahu entered meditation’s territory when he said: “When I do a relaxing talasana pose in the morning and I turn my head to the right, India is the first democracy that I’ll see.” Add added: “And when Prime Minister Modi does a relaxing pose of vasistasana and he turns his head to the left, Israel is the first democracy that you can see.”

While it is somewhat doubtful that Netanyahu regularly engages in yoga postures when he rises every day, the gesture was surely appreciated by Modi, a known yoga aficionado.

Ahead of his visit to Israel, Modi had said jokingly that a little more time spent on the practice might help solve some of the Middle East’s problems. Interviewed by Israel’s Channel 2, Modi was asked at one point if he would invite Netanyahu to join him in a yoga session. The prime minister laughed and noted that many Israelis appreciated the ancient Indian discipline. When his interviewer suggested Yoga could help solve the Middle East’s problems, Modi laughed and said “That would delight me.”

During the Cold War, India was a leading member of the Nonaligned Movement of developing countries and sided staunchly with the Palestinians in their conflict with Israel. Before ties were established in 1992, India would not even allow its citizens to enter Israel on an Indian passport. But over the past quarter century, the two countries have cultivated warm ties, particularly in the areas of agriculture, technology and defense cooperation.

Sources: Times of Israel, Times of India, and Economic Times.