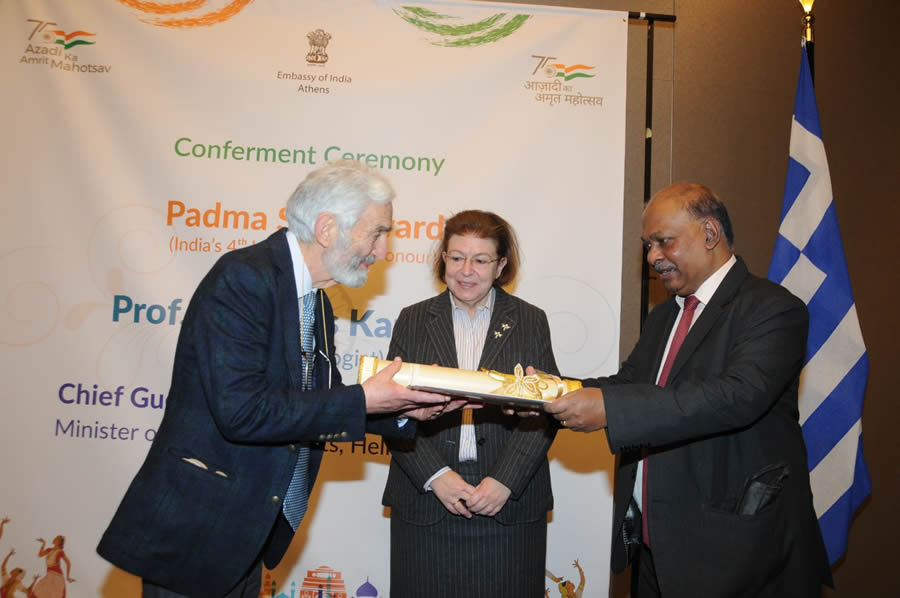 A conferment ceremony was organized on March 1, 2022 in Athens to present the Padma Shri Award to the Greek Indologist Prof. Nicholas Kazanas for his distinguished service and contribution towards enrichment of literature and education.

The Ambassador of India to Greece Mr. Amrit Lugun presented to the Indologist Professor Nikola Kazana the Padma Shri Award conferred by H.E. the President of the Republic of India in 2021 and spoke about its importance as it is India’s 3rd highest distinction.

Chief Guest H.E. Ms. Lina G. Mendoni, Minister of Culture & Sports of the Hellenic Republic presented the Padma Shri medallion to Prof. Kazanas. In her speech she stressed the importance of the cultural contacts that unite Greece and India for millennia and expressed her wish for their further expansion. (Read Ms. Mendoni’s speech in Greek HERE)

Prof. Nikolaos Kazanas, in his acceptance speech, thanked the Government of India and the Honorable President for the honor bestowed on him, expressed his joy at receiving this Award and spoke about the philosophical and poetic significance of the Sanskrit language.

The ceremony was attended by several foreign and Greek diplomats, Greek Indologists, representatives of Greek-Indian Cultural Associations and prominent members of the Indian community residing in Greece.