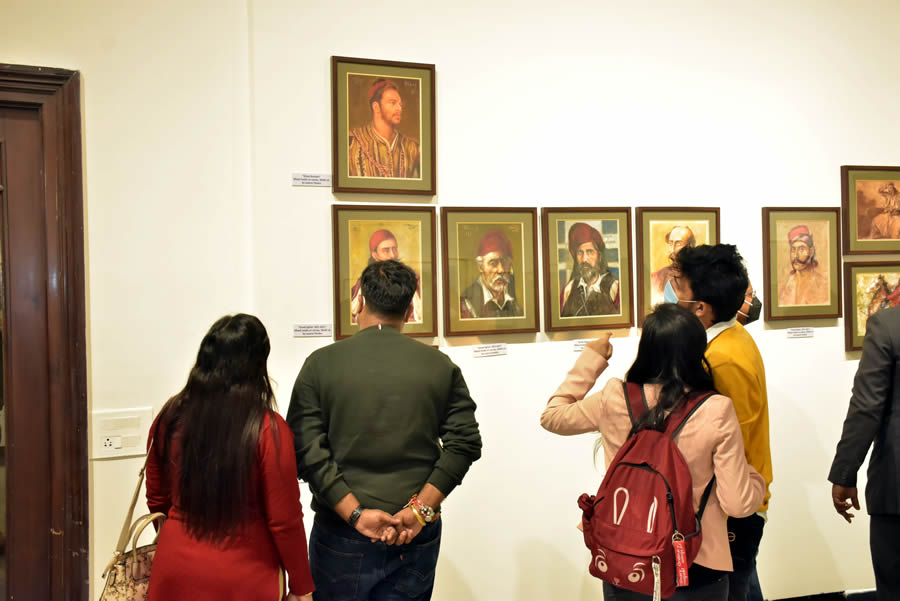 As part of the celebrations dedicated to the 200th anniversary of the Greek Revolution, the Hellenic Indian Society for Culture & Development (ELINEPA) in collaboration with the Indian Council for Cultural Relations (ICCR) and the Embassy of Greece in New Delhi organize a painting exhibition and a series of cultural events in India to honour the memory of the heroes who fought against the Ottoman Empire for the independence of Greece during the liberation war in the years between 1821 and 1829.

Four contemporary Greek artists Claire Tsalouchidis Hadjiminas ,  Froso Vizovitou, Lazaros Pandos and Pavlos Samios are presenting for the first time their painting works which are inspired by the Greek Revolution of 1821.

More than 200 people attended the inauguration of the exhibition that was made by H.E. the Ambassador of Greece Mr. Dionyssios Kyvetos and Director General of ICCR Shri Dinesh Kumar Patnaik on Sunday, November 21, 2021, at 4.00 pm at BIKANER HOUSE, between Pandara and Shahjahan Road, India Gate, New Delhi. The Hellenic-Indian Society of Culture and Development was represented by Ms. Yvonne Alexandridou, former Honorary Consul of India in Thessaloniki and main inspirer of the whole action.

The exhibition will remain open to the public, with free entrance, from 22 to 27 November, 2021, (daily) from 11.00 am to 6.00 pm. All Covid-related safety protocols and the necessary sanitary measures will be observed.

During the painting exhibition, parallel workshops and interaction with Art students took place at Lalit Kala Academy, New Delhi (22 November), at Delhi College of Arts and Amity University, Noida (23 November ) and at Pracheen Kala Kendra Complex, Chandigarh (25 and 26 November) with the participation of the Greek artists Maria Xanthakou and Claire Tsalouchidis Hadjiminas, while the historian Zafeiroula Kagkalidou gave speeches on the Greek Revolution of 1821.

The events were covered with extensive reports by local and international newspapers in Greece, India and Australia.

Read also: “Significance of the Greek Revolution of 1821 for Greece and India,” an article by the Chairman of ELINEPA Dr. Dimitrios Vassiliadis on the occasion of the painting exhibition.

CLAIRE TSALOUCHIDIS HADJIMINAS
Born in Athens, she studied Political Science at the University of Athens (1979-1982).
For five years she lived and worked in Brussels and London.
During her stay in London she attended courses of Art History at Sotheby’s.
Upon her return to her native Athens, she concentrated excessively on her Art.
Working next to important artists for years she chose her medium to be acrylics, pastel and charcoal
She presented her work in many solo and group exhibitions.
Since 2009 she exhibits at Argo Gallery in central Athens and important Public Spaces and Museums.
Website: https://www.facebook.com/Claire-Tsalouchidis-Hadjiminas-The-Art-of-Dreaming-809905345777251/

As an active member of the Hellenic-Indian Society for Culture and Development, she studied Hindi and Indian philosophy and translated Indian poetry into Greek. Her paintings have been exhibited at Triveni Kala Sangam Gallery and in Lalit Kala Akademi in New Delhi as well.
Website: https://vizovitou.gr/

From the beginning of his career, Lazaros Pantos drew standards from ancient Greek values. His intense interest in archeology, ancient Greek philosophy and Aesthetics was temporarily satisfied with his work on the preservation of works of art of the Greco-Roman heritage, but he turned more strongly to Fayoum through his work at the Cairo Museum, where he also wrote a doctorate for their history.

He works in the field of decorative and applied arts and taught painting to the Christian Community of Young People in Thessaloniki.
Website: https://www.facebook.com/lazaros.pandos

PAVLOS SAMIOS
Born and lived in Athens. His talent was shown when he started drawing and painting at a very young age, shoe models for his father who was a shoe maker. Religious and traditional painting captivated him and he was admitted with high grade in the Athens School of Fine Arts. His teachers and encounters were great artist in art music poetry and philosophy from which he acquired a lot.

From 1978 to 1991 he lived and worked in Paris, France. He was elected professor and teacher from 2000 to 2015. His work includes traditional painting, byzantine icons, manuscripts,  frescoes, encaustic painting, etc. He painted many chapels using the fresco technique.

He solo exhibited his works in 79 shows and has participated in major group exhibitions in Greece and abroad. His works are in several Museums and private collections.
Website: www.samiospavlos.gr