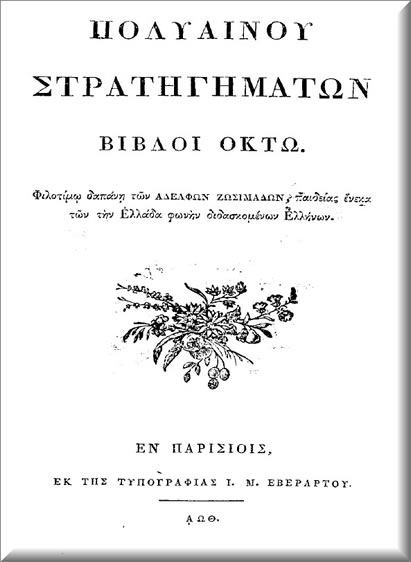 Polyaenus, a second-century teacher of rhetoric, was born around AD 100 in Bithynia from a family of Macedonian descent. For some time he lived in Rome where he practiced the profession of a jury orator.

Polyaenus wrote eight books with nine hundred stratagems, which start with Dionysus’ campaign to India and Bactria. The second chapter of the first stratagem refers to Dionysus’ General, Pan, and the third to Hercules who also stated that campaigned to India.

Polyaenus dedicated his Stratagems in war (Strategemata) to two Roman emperors Lucius Verus and Marcus Aurelius, when they set out on a war against the Parthians, in 163 A.D. They aimed to give emperors short examples of past campaigns from which they could learn.

The sources of Polyaenus come from previous writers before and after Alexander, such as Megasthenis, who stated that Dionysus and Hercules had been conducting campaigns in India and Bactria thousands of years before Alexander the Great.

The Greek text of Polyaenus was translated into English in 1793 by R. Shepherd, who hoped that the Stratagems would help the British generals who at that time were establishing the British Empire in India. Shepherd’s translation is obsolete and inaccurate in many places and therefore many changes have been made to its subsequent editions.

The Greek text edited by Adamantios Korais was printed in 1809 at the printing house of I.M. in Paris with the expenses of the Zosimades brothers.

Download the first volume of the Greek edition HERE

Download the entire book (edited by E.Woelfflin & I. Melber) HERE