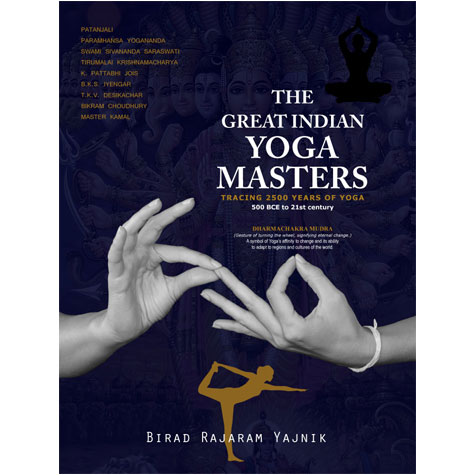 The Indo Hellenic Society for Culture & Development (ELINEPA) and Shakti Yoga Studio organise a presentation dedicated to the Great Indian Yoga Masters. This event is specially dedicated to Yoga Acharya BKS Iyengar who passed away on August 20, 2014.The Program:Welcome address by Mr. Ram Verma, First Secretary, Embassy of India in Greece.Presentation of the Book “The Great Indian Yoga Masters” Author, Birad Rajaram Yajnik, Publications Division, Government of India, by Dr. Dimitrios Vassiliadis, Chairman of ELINEPA.An Introduction to Iyengar yoga by Christos Pavlou, 1st Greek Iyengar certified teacher, holds the highest Iyengar certificate in Greece.Screening of the movie ”Leap of Faith,” a 72 mins documentary on the life and works of BKS Iyengar in English language (no subtitles).

Initiated in India over 2,500 years ago, yoga has since touched nearly every aspect of contemporary global consciousness. Over the centuries, it has responded to the practical and philosophical needs of seekers in myriad ways that has kept alive its freshness and relevance.
In India, the traditional form of preserving a body of knowledge has always been through its transmission from master to student.
From its exposition by the Lord himself to the human aspirant in the Bhagavad Gita, yoga has been codified, ratified, rejuvenated, and increasingly transmitted to the larger world through the works and teachings of Patanjali, Buddha, Paramahansa Yogananda and the Himalayan yogis, as well as Swami Sivananda Saraswati. Paradoxically perhaps, the names of masters such as Tirumalai Krishnamacharya, K. Pattabhi Jois, B.K.S. Iyengar, Bikram Choudhury, T.K.V. Desikachar and Master Kamal may be better known today outside India. Their classes continue to attract increasing numbers of students of hatha yoga, pranayama and meditation.
The living, dynamic nature of yoga can be seen from how it has changed through time, reinterpreted and transmuted by each master according to the needs of the age.
This book seeks to trace the path of yoga from its earliest historical mentions and down through its interpretations by the Indian masters of subsequent centuries.

About B.K.S. Iyengar and the Documentary ”Leap of Faith”:

B.K.S. Iyengar was born in 1918 in India. He has been practicing and teaching yoga since his teenage years, when he was introduced to yoga by yogi Sri Tirumalai Krishnamacharya. He is the founder of Iyengar Yoga. With Iyengar yoga classes being offered throughout the world, BKS Iyengar is considered one of the foremost yoga teachers in the world. He has written numerous books, with Light on Yoga (1966) being his first and most famous one. It became an international best-seller and succeeded in making yoga well known throughout the globe.

”Leap of Faith”: This 72 minute film spans 9 decades of Iyengar’s life and over 70 years of his practices and teachings. It shows him as guru, teacher, husband, father and shishya- a multifaceted personality. The story is narrated by internationally acclaimed actor Nasseeruddin Shah, an Iyenger yoga student himself. The film contains extensive footage of Guruji’s practices, teachings, interviews and daily life style.

Entry is free to all.