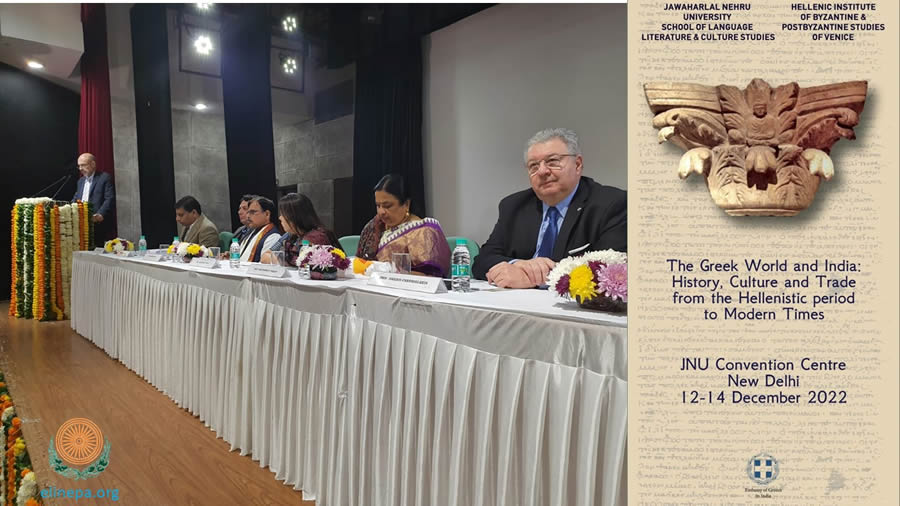 The conference took place from 12 to 14 December 2022 at the Convention Center of the Jawaharlal Nehru University, in New Delhi with the participation of scholars and researchers from Greece, India and other countries.

The international conference is part of the steady course of strengthening and developing the relations between Greece and India, and it was proposed by H.E. Minister of Foreign Affairs of the Hellenic Republic Mr. Nikos Dendias during his visit to India in March 2022.

The aim of these academic meetings is to bring to the forefront the most recent research on the interaction, communication and influences between the Greek World and India from the period when these were at their peak, following Alexander the Great’s quest into Asia, until Modern Times. It is a firm belief of the organisers that exploring past aspects of the 2500 years-long history of Indo-Hellenic contacts could open new ways of promoting and enhancing current relations between the two nations.

The Inaugural session started with the traditional lightening of the lamp & prayers and a video message by the Foreign Minister of the Hellenic Republic, Mr. Nikos Dendias, in which he stressed that the Indo-Greek relationship aspires to become strategic, as Greece and India see many things in a very similar way. Watch the video message of Nikos Dendias below:

Minister of State for External Affairs and Culture, Mrs. Meenakshi Lekhi was the Chief Guest at the Conference. In her speech, Mrs. Lekhi made a very important proposal that Greece and India work closely together in the framework of UNESCO to inscribe common tangible and intangible heritage. Furthermore, she said that, from an Indian perspective, Greece was never considered a country of the West but a bridge between East and West. She referred to the Indo-Greek Bactria that was right on the edge where India met other civilizations. She also stressed that the two civilizations were connected and in touch even two centuries before Alexander the Great. She also mentioned that there were references to the Greeks in the great Indian epics like the Mahabharata. She further mentioned that “Greece and India had some fantastic exchanges in old times, they were competing but understanding each other as well”. While now the world mindset has changed so countries like India and Greece need to work together to “decolonize history”. Listen to Meenakshi Lekhi’s speech in the video below:

The participation of the Secretary-General for Greeks Abroad and Public Diplomacy of the Ministry of Foreign Affairs of Greece, Professor John Chrysoulakis in the Conference on the Greek World and India was a clear sign on the part of Athens that there is a commitment to keep upgrading the already excellent ties between the two nations. Prof. Chrysoulakis, who was the Keynote Speaker of the Conference, stressed that this is an event that has no precedent. He said that the millennial relationship between Greece and India is multifaceted and one that was always open to cultural and spiritual osmosis. He referred in detail to the Hellenistic period and the era of mutual Indo-Greek influences in the subcontinent following the passage of Alexander the Great. He expressed his great satisfaction with the fact that this Conference represents a significant boost in the Indo-Hellenic ties. (Read the whole speech HERE)

The Ambassador of Greece to India, Mr. Dimitrios Ioannou speaking at the International Conference on the Greek World and India said: “I feel gratitude for being chosen to represent Greece in the magnificent and incredible country of India. Both countries represent an “Ecumene”, societies built upon their own ideas, that can live, survive and advance through history by the force of their own values, spirit and civilization, while at the same time open to interaction and dialogue with other civilizations. Greece and India, having developed these ecumenical civilizations that existed in parallel at two different points of the earth, found a way to communicate, understand one another, and find common ground. And I find it particularly amazing that now you, the leading Experts, are trying here to explore and to establish how this interaction took place and how deep and strong this interaction has been. And this is something wonderful not only for the sake of pure science and of abstract knowledge but also because the nowadays holders -that is the people- of these two ecumenes need to know. Their past is the forerunner of their present and of their future.”

Delivering her inaugural address, the Vice Chancellor of the JNU, Prof. Santishree Pandit, termed the conference as a dialogue between India & Greece where tradition meets modernity, blends realm with region and myth with reality. She also emphasized that there could be no better place than the JNU for the organization of such a Conference, as JNU has always fostered dialogue among civilizations and is the perfect place for innovation. She said that the Greek civilization is one of the greatest civilizations and exerted influence in all the range of sciences. She also mentioned that in the South Indian state of Tamil Nadu there are many historical records of Greek trade during the Sangam period, that the Gods of India and Greece are the “most colorful, the most vibrant, the most human and that an event on the comparative study of their common characteristics can be organized in future.

Professor Vasileios Syros of the JNU Greek Chair said that both Greece and India possess tremendous cultural capital and can play a pivotal role in fostering mutual understanding and peaceful symbiosis among the world’s nations. He added that the Greek Chair aspires to be part of this unique process of enhancing Greek-Indian relations.

The President of the Hellenic Institute of Byzantine and Post-Byzantine Studies Prof. Vasileios Koukousas stressed that the presence of the Institute in Delhi today confirms the centuries’ old ties between the two countries. He analyzed how India was a great way to the Far East and a place of possibilities for the Greeks during Byzantine times.

The Dean of the JNU School of Languages, Professor Mazhar Asif, stressed that Greece, India, and Persia are considered to be the hub of language, culture, and civilization and proposed that the Scholars do comparative research on Greek and Indian epics to bring new light on the Indo-Greek relations.

Former Secretary General of the Greek MFA and former Ambassador of Greece to India, Mr Ioannis Zepos, during whose tenure the Greek Chair at JNU was established, said that the Chair has been a constant light ever since, illuminating the common humanistic values between Greece and India.

The inaugural session closed with a vote of thanks by Assistant Professor of the Greek Chair at JNU Dr. Anil Kumar Singh, who was the Co-Ordinator of the Conference.

After the conclusion of the inaugural session of the International Conference on the Hellenic World and India, the Secretary-General for Greeks Abroad and Public Diplomacy of the Ministry of Foreign Affairs of Greece, Professor John Chrysoulakis, and the Minister of State for External Affairs and Culture, Mrs. Meenakshi Lekhi, inaugurated a magnificent, state-of-the-art Digital Exhibition of a rare unique byzantine manuscript with a large number of miniatures that depict the life of Alexander the Great (including scenes from his passage through India). Visitors had the opportunity to see these miniatures and admire the manuscript’s pages through the use of state-of-the-art digital media until the 16th of December at the JNU Convention Centre. (Read more about the exhibition HERE).

Prof. Christos Arampatzis, Faculty of Theology, Aristotle University of Thessaloniki, and
Prof. Georgios Pitsinelis, Faculty of Philology, National & Kapodistrian University of Athens
“The Reception and the Role of Light in the Byzantine and Hindu Religious Traditions”

Prof. Michael Kordosis, Professor Emeritus, University of Ioannina.
“The Greek Kings of Bactria and India according to Textual Sources: From Diodotus I to Menander”

Dr. Shivalika S. Khopkar, Department of Archaeology and Ancient History, The Maharaja Sayajirao University of Baroda, Vadodara.
“The Ones who ride Ketos and Makaras”

Prof. Stefanos Kordosis, School of Humanities, Social Sciences and Economics, International Hellenic University.
“From the Black Sea to the Caspian and from there to India: Trade Routes and Distances from Astrakhan to India according to a Late 17th c. Greek Manuscript”

Dr. Federico Reggio, Department of Private Law and Critique of Law, University of Padua, Italy.
“Dialogue as a Challenge, Dialogue as an Opportunity for Preventing Conflicts and Solving Disputes: A Reading of Some Excerpts from the Milindapanha”

Prof. Seema Yadav, Assistant Professor, Dr. B. R. Ambedkar University Delhi.
“A Critical Note on the Trade and Economy of India and Greece in the Hellenistic Age”

Prof. Vasileios Syros,  Greek Chair, JNU.
“Summary and Concluding Remarks” and reading the Address of Prof. Manolis Varvounis, Dean of the School of Classics and Humanities, Democritus University of Thrace.