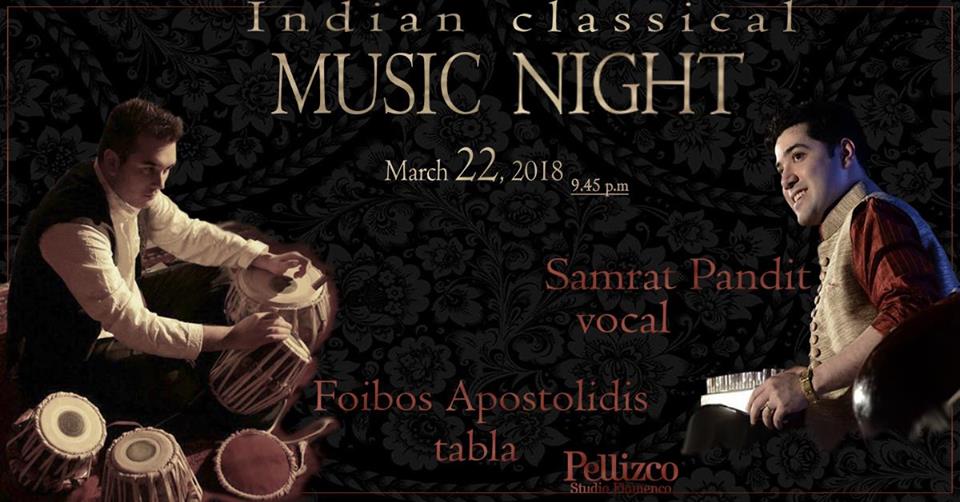 The next day, Friday, March 23, 13:00 – 17:00, Samrat Pandit will give at the Studio Flamenco “Pellizco” a seminar on four Indian ragas that are sung at different time of the day, for those who are interested in deepening their knowledge in Indian music.

Information on the artists

Samrat Pandit  is a Hindustani classical vocalist from the Patiala gharana (singing style). He lives in Kolkata, West Bengal, and from 2013 he travels around the world giving concerts of Indian classical music. He belongs to a family of musicians and is its 6th generation. His father was Pandit Jagdish Prashad, a Hindustani classical singer of Patiala gharana and direct student of Ustad Bade Ghulam Ali Khan. He received the Sangeeta Shiromani Award from the governor of Maharashtra in 2014

Foibos Apostolidis was born in Katerini.  At the age of 19 he decided to occupy himself with music professionally. He studied with Lukas Metaxas and Dimitris Panagoulias percussion of the Eastern Mediterranean and rhythm. He felt his love for Indian classical music taking lessons of tabla from Sakis Laios. From 2015 he studies  tabla with Hiren Chate, a world renowned performer of Punjab Gharana and a student of Pt. Yogesh Shamsi. He has participated in numerous musical ensembles supporting many soloists in concerts in the Greece and abroad. He is a regular member of Mirror Tuners and Loxantra.